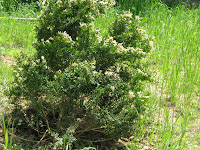 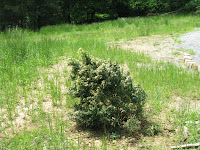 Once upon a time, before I was born, but after my father was grown up, he drove my grandmother over to visit the graves of her great-great-grandparents. Around their graves grow boxwoods that came from the twig her great-great-grandmother carried across the mountains from Virginia. It was a hot August day, and my grandmother broke off a sprig and used it as a fan on the way home. Getting out of the car, she stuck it in the ground at knee level where the root cellar was. Without any more intention than that, it rooted.
After my parents built their new house my father rooted some cuttings from that bush. From those he rooted many more that he gave away, two of which I took to North Carolina and planted in places I lived there, taking them back across the mountains. Now that we've sold that house, I've had one of the cuttings moved here. It was growing against the corner of the house there, and seems to be a little off balance here, but I hope it will straighten up when it's been in its new home more than four days. There isn't anything to show the scale, but it's about four feet tall.
Posted by solarity at 8:03 PM