all blooming at once

The zinnias are still blooming, although I fear a lot of the buds are never going to open. The marigolds are having their last flourish before frost, and the pansies I just bought will keep going long after frost. I thought I was buying three plants of blue pansies, but one of them turned out to be yellow. 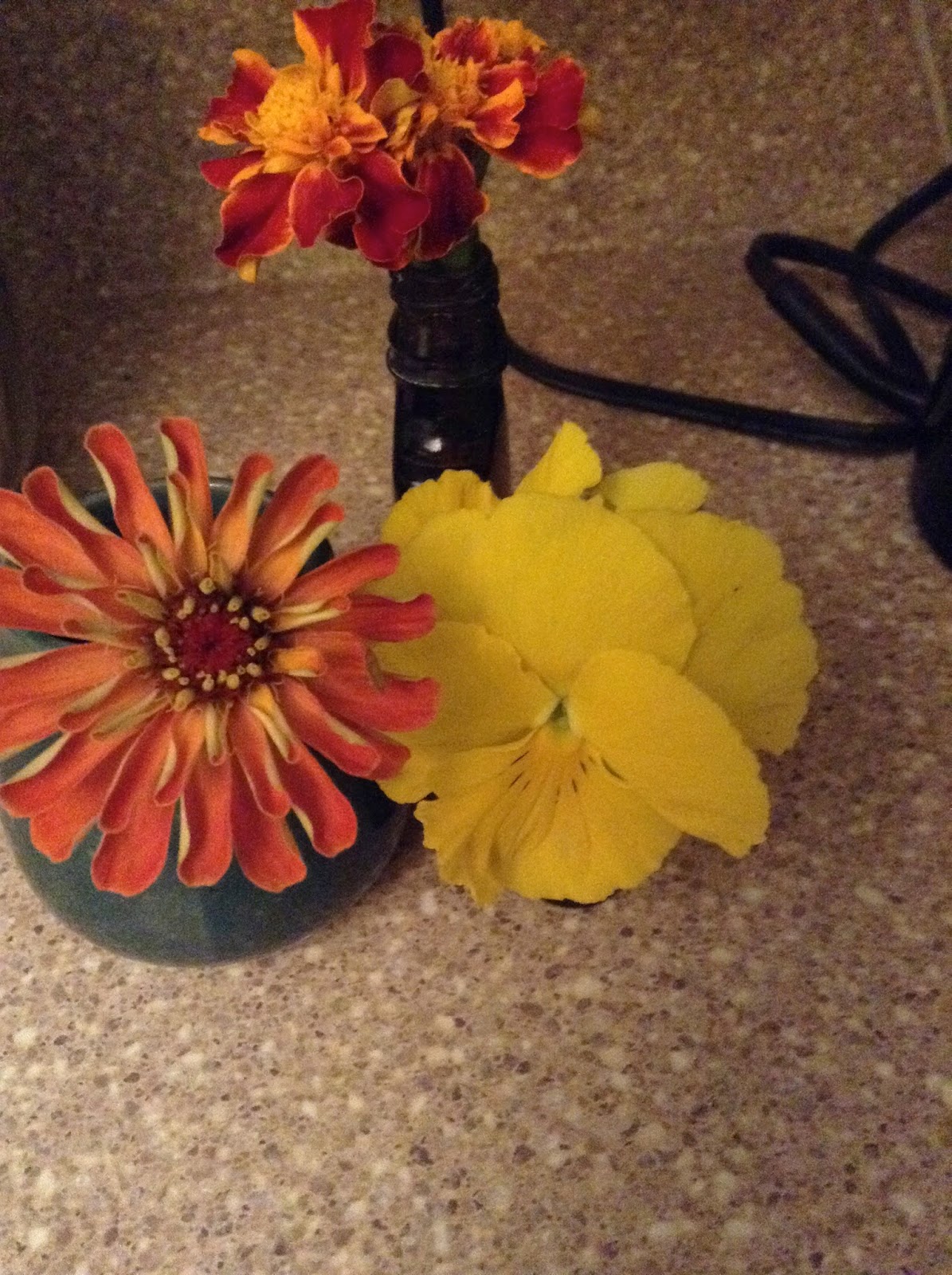 I went for a walk on one of my precious Days Off, somewhere I've never been, in one sense, somewhere extremely familiar in another. This section of the Louisville Loop (http://www.louisvilleloop.org) opened not long ago, and I walked about a mile and a half and back. Then I drove home over roads that I used to drive to work every day (until I moved to the city) and went from my starting point to my turning around point in about five minutes instead of an hour.

Just a little distance from the parking space the trail goes under the road alongside Pope Lick creek. If you kept going upstream and follow the right branch (er, the correct branch) you would come to the place where I lived until I was seven. 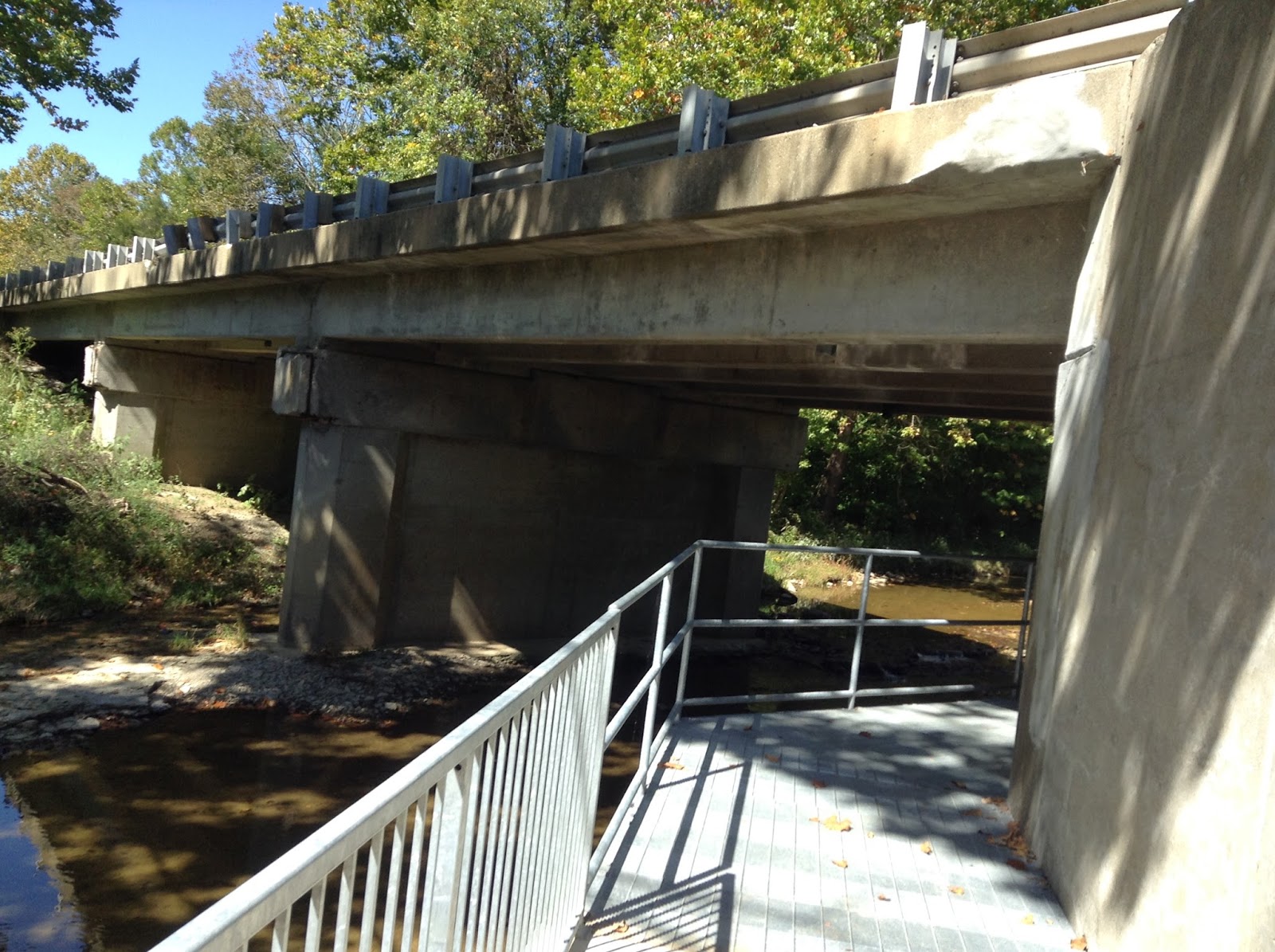 Even here, where it's about to empty into Floyd's Fork, the creek is shallow most of the time. My father and I used to wade upstream from our place until we got to a place where it was too deep for my three or four year old sized boots. 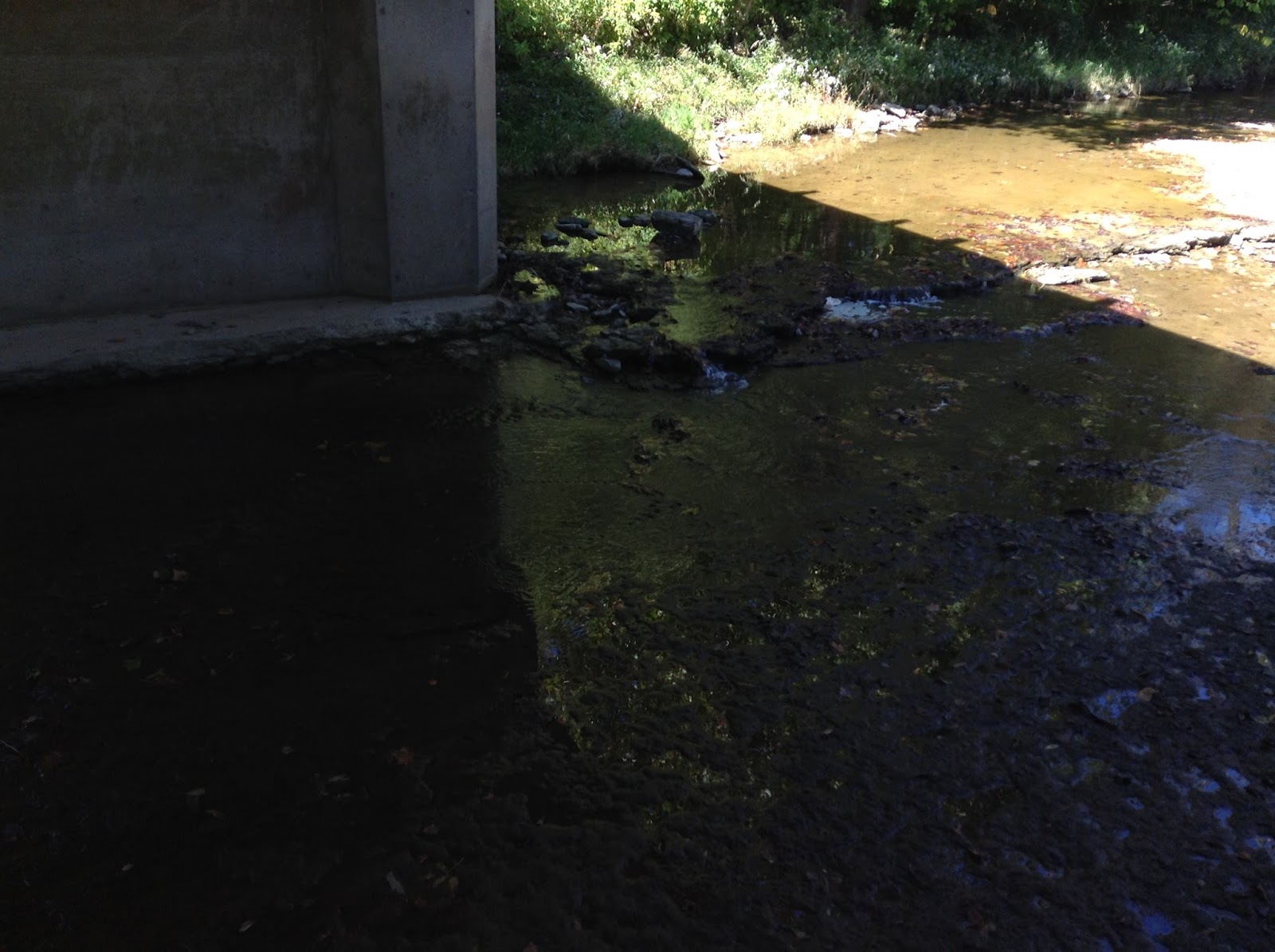 This trail is intended for cycling as well as (maybe more than?) walking, so it's very well paved. 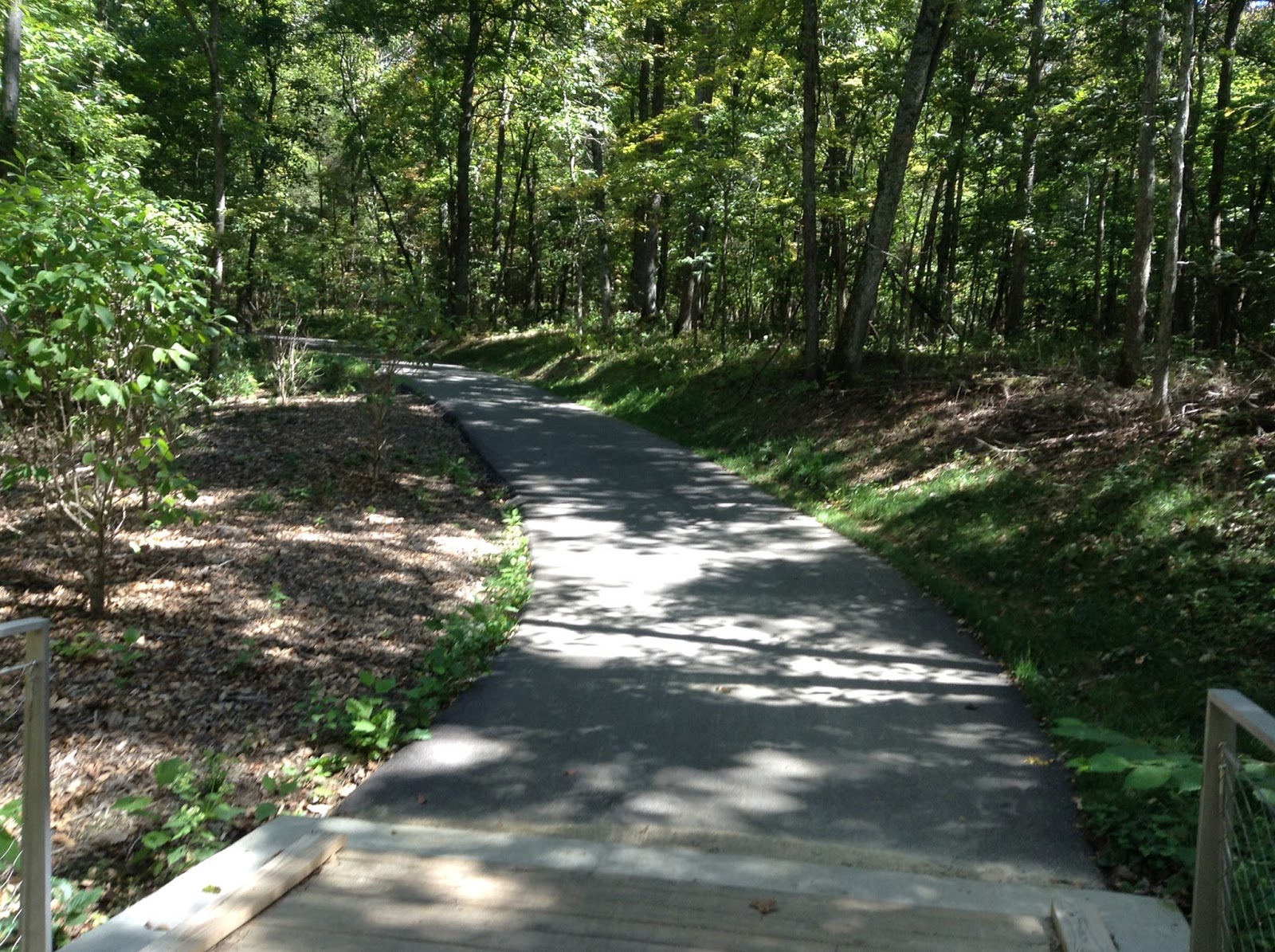 Boneset is one of my favorite wild flowers, and not scarce. 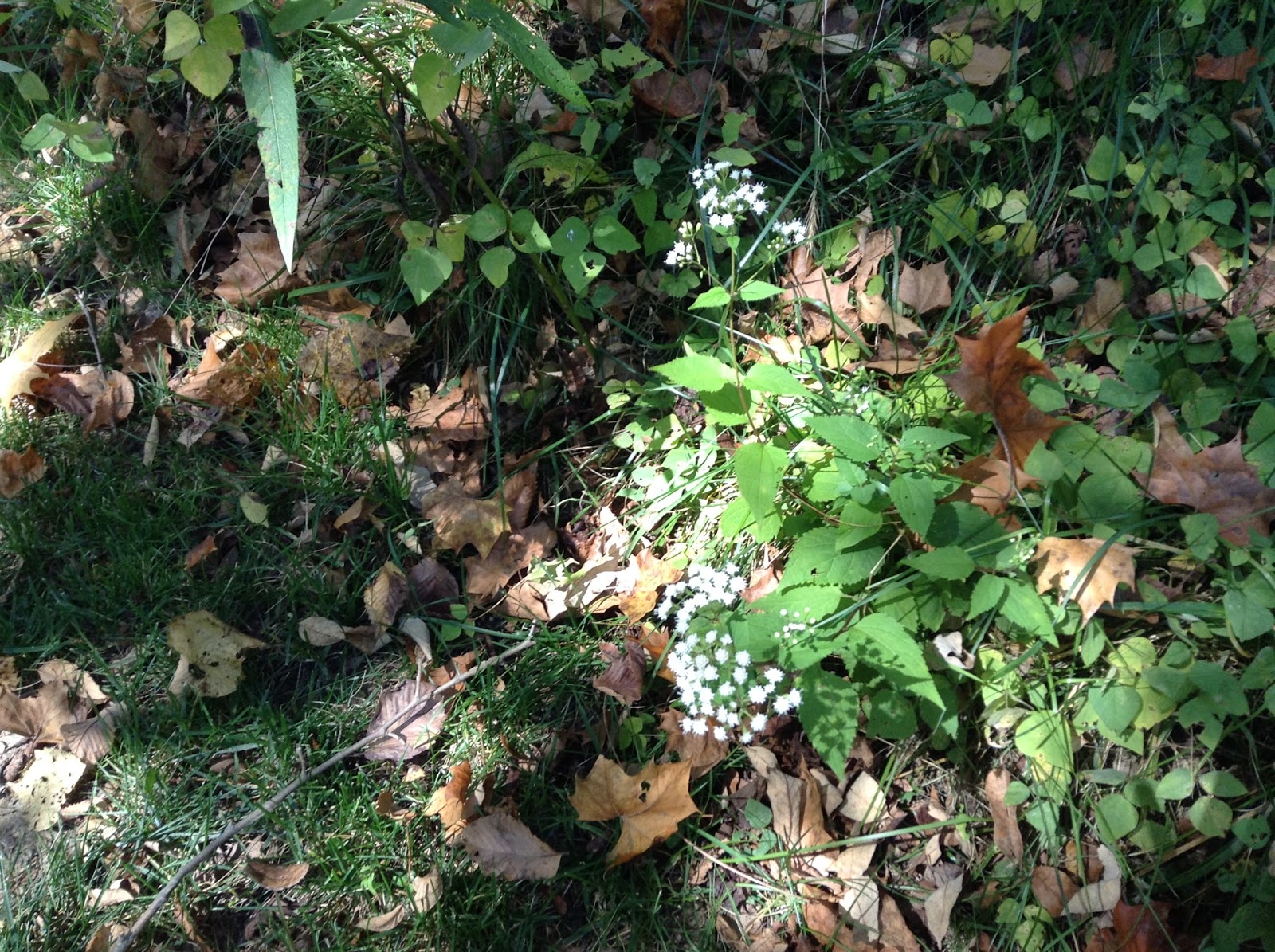 I went on up through the woods to the top of the hill, which was very much like pastures I used to walk in not so very far from there. 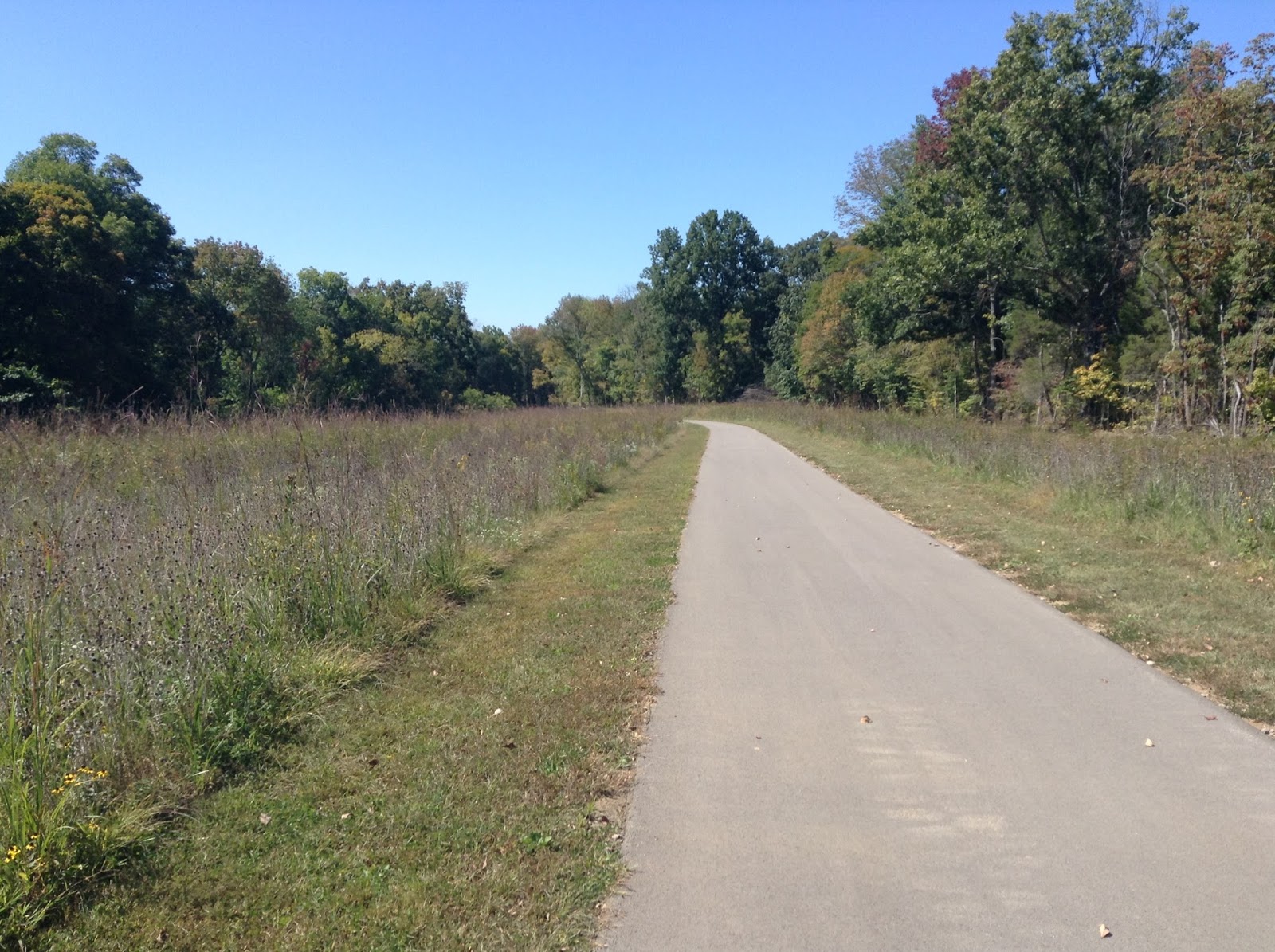 Clearly former pasture, though without any fencing I don't know what they'll do with it now. . 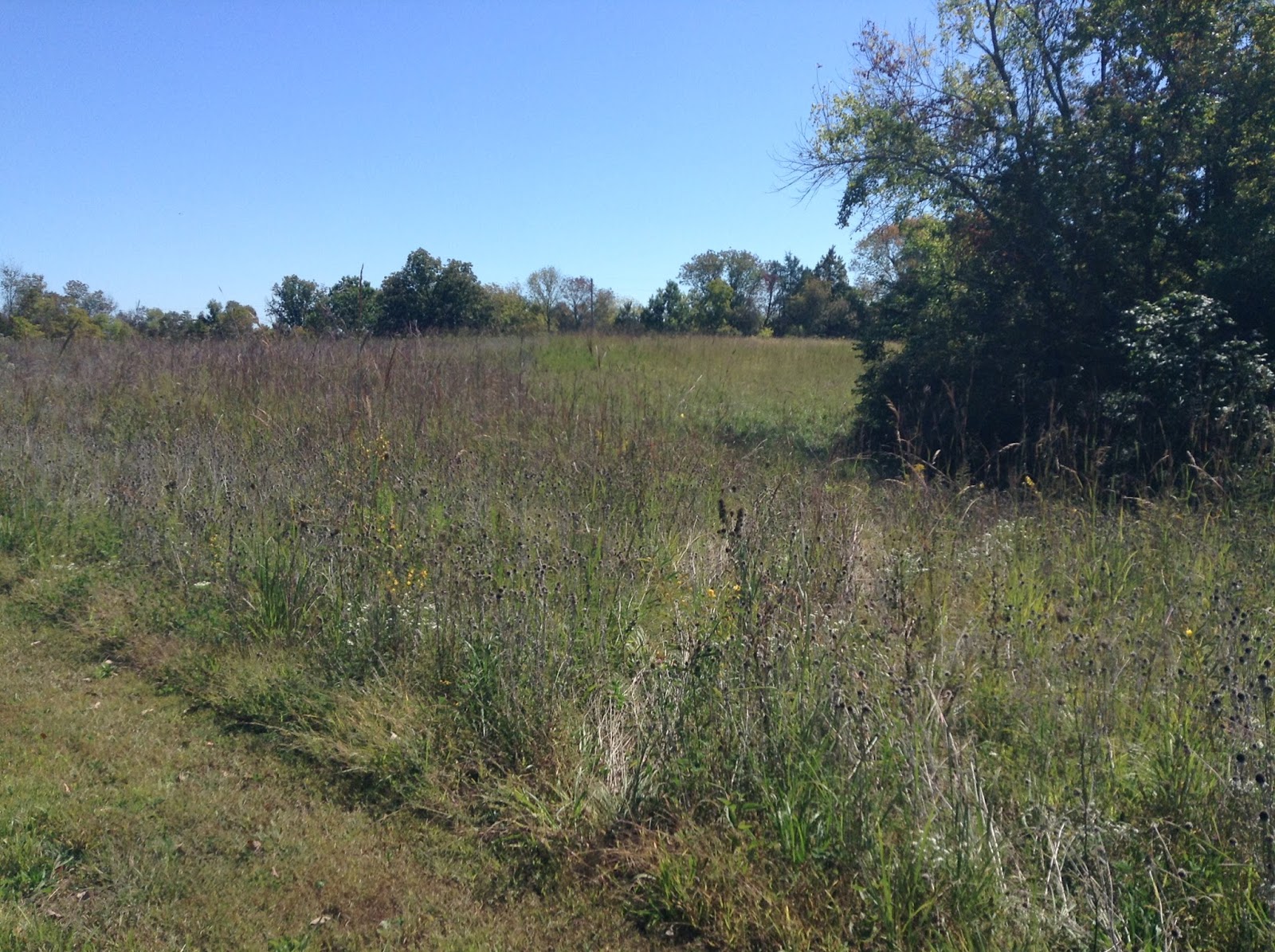 This is the top of the hill, and I went down to the next road crossing, intending to go farther, but the lack of any restrooms anywhere near where I had parked decided me to turn back. Much of this trail is built on a right-of-way through private property, so if you step off the trail behind a handy tree you're trespassing.
And there are lots of tempting trees. 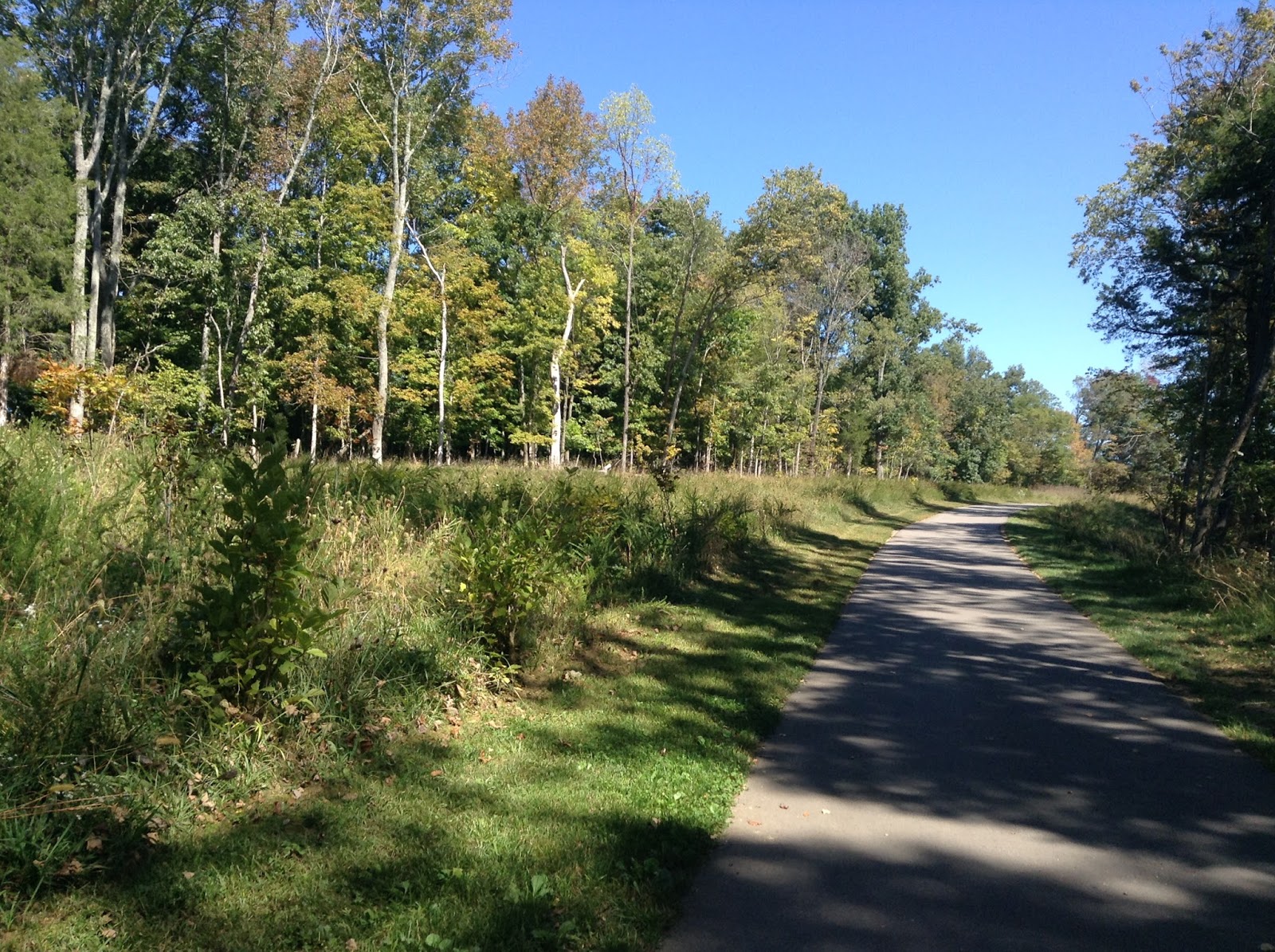 On my way back I encountered these two half-grown fawns. Spots barely visible. 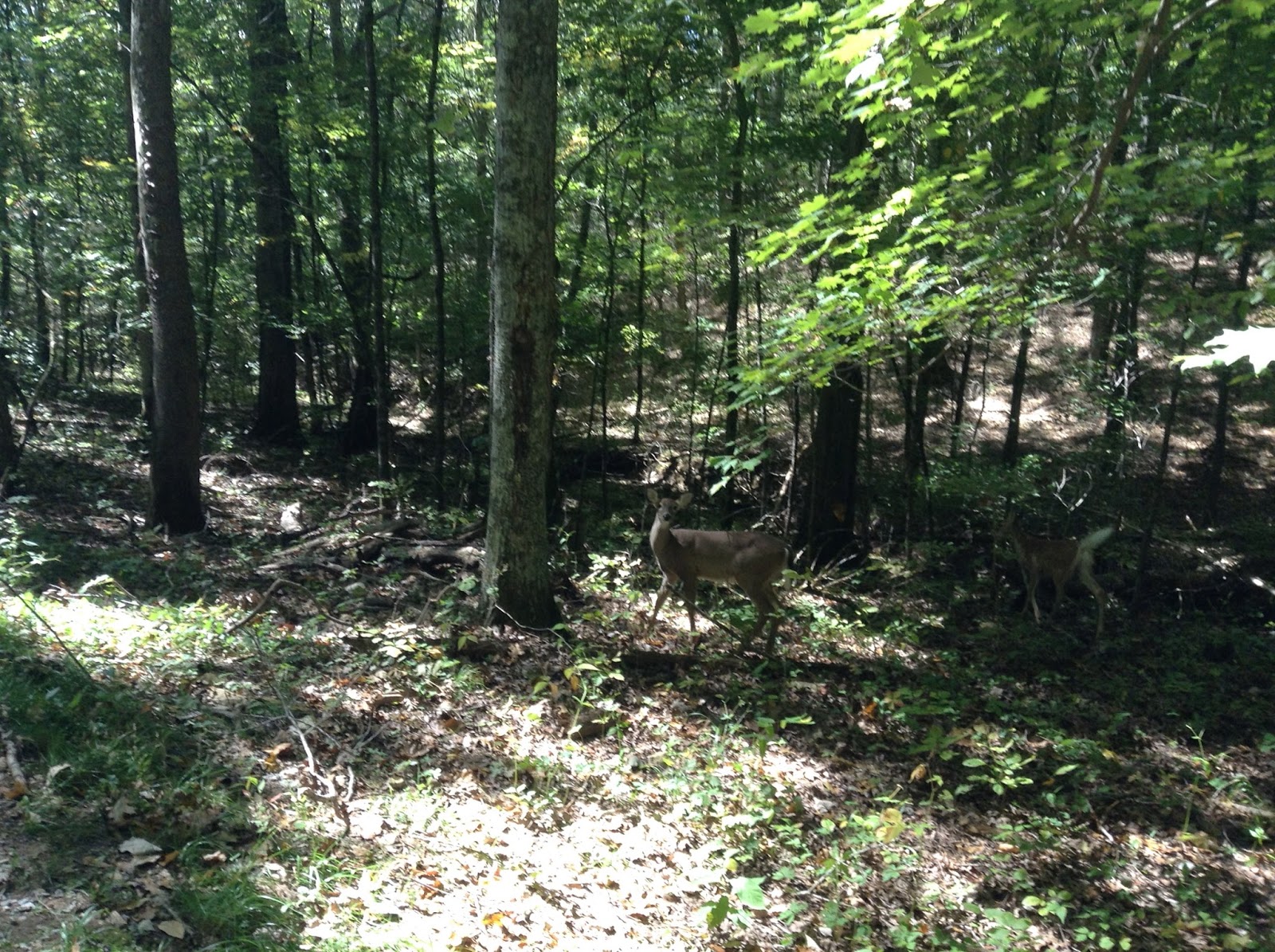 I was standing on the trail less than fifteen feet from them, and they were curious but completely unalarmed. They continued browsing as I took many more pictures, expecting them to take off any moment, and wanting to get them in flight. 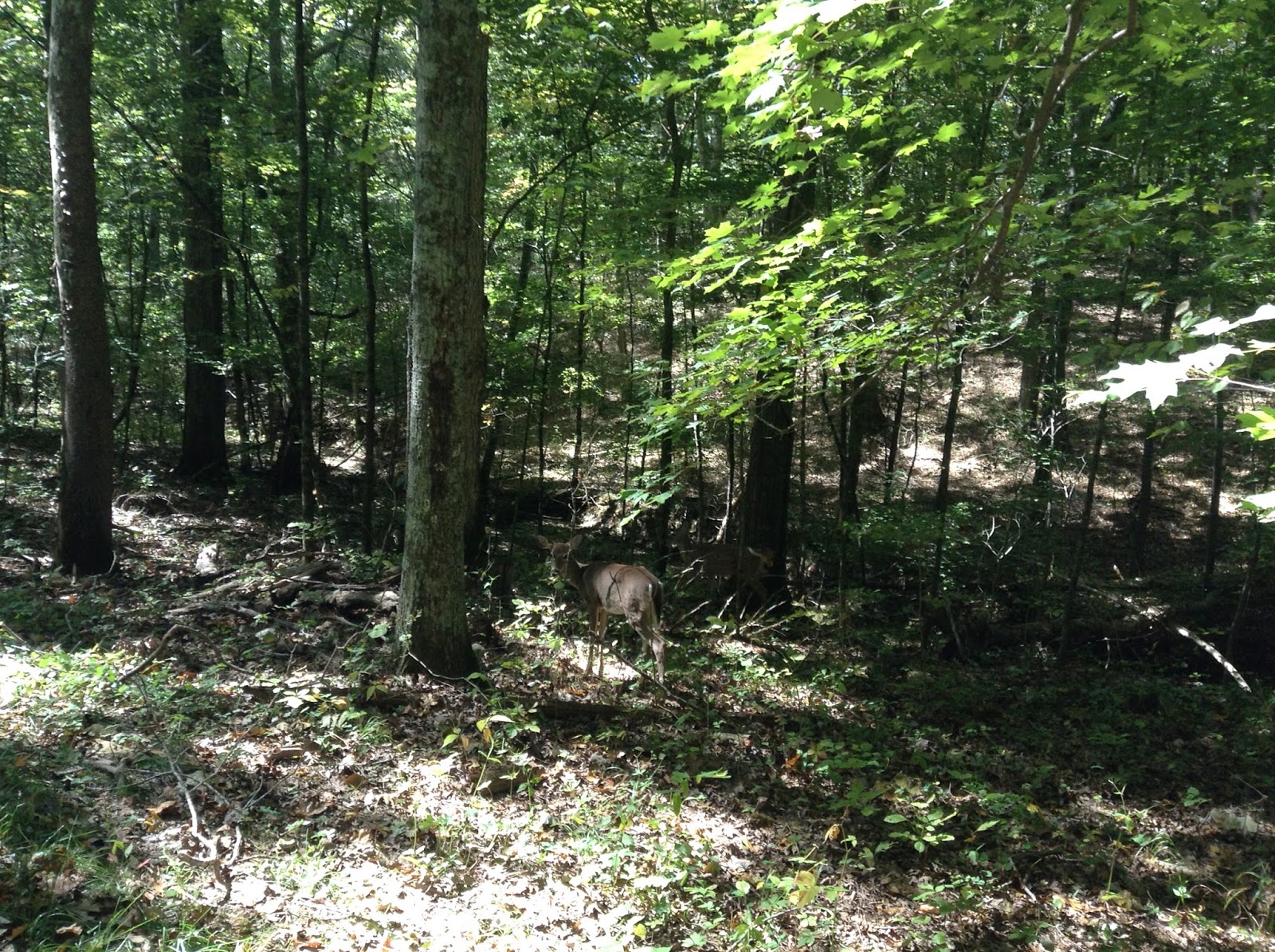 In fact, I left before they did. See the pricked ears? 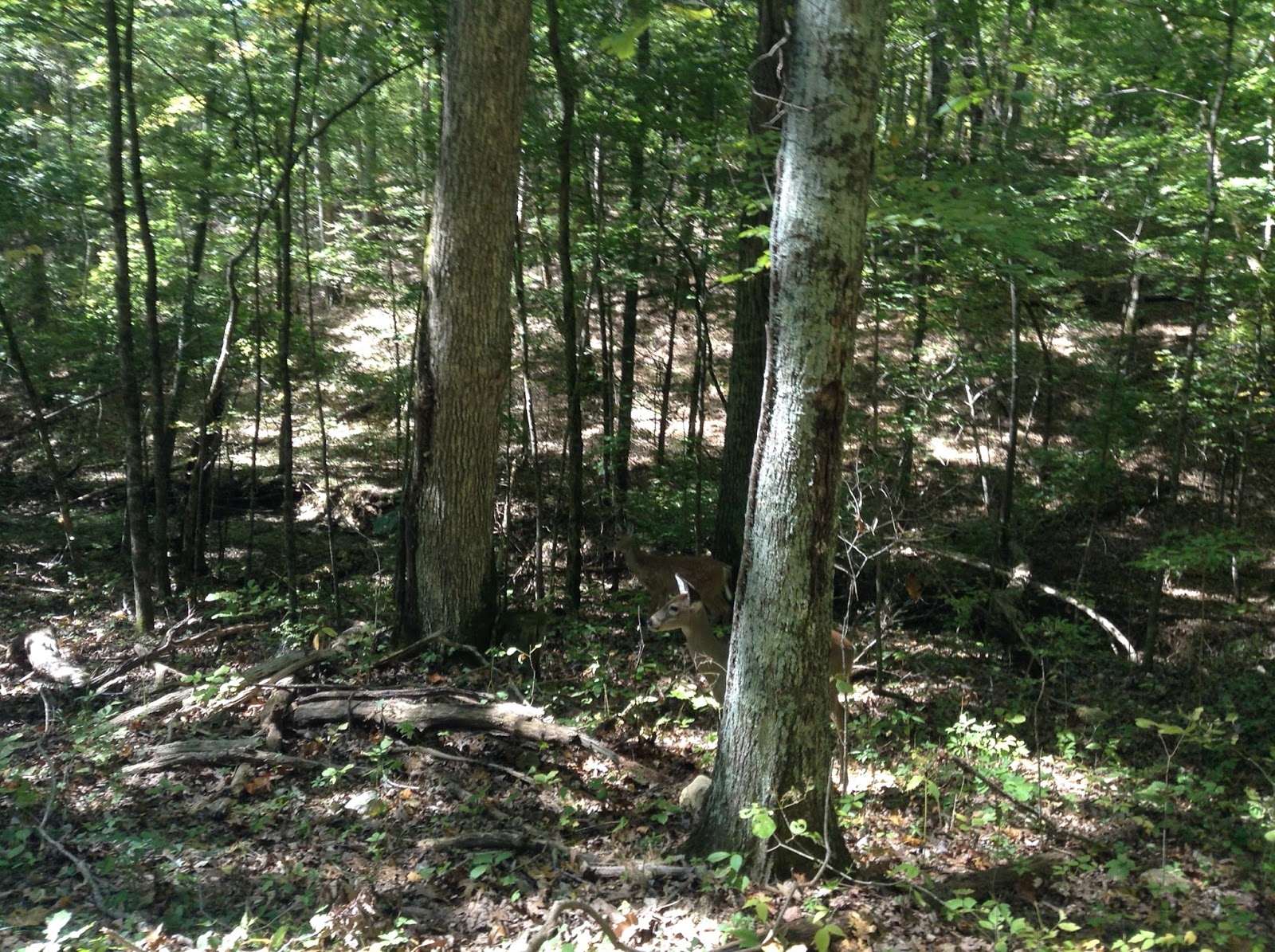 That was caused by the man on a reclining tricycle, who had a radio (why??? in the woods???) on his bike. Because it was a tricycle, when he saw them he was able to come to a halt without standing up, which might have spooked them, and when I gave up and walked off he was still there watching them.

I went back towards where I started, seeing a lot more this blue flower, which I don't recognize, and could swear I've never seen before, but I didn't take any more pictures of it, which is a pity as coming from the other direction I might have gotten a clearer one. 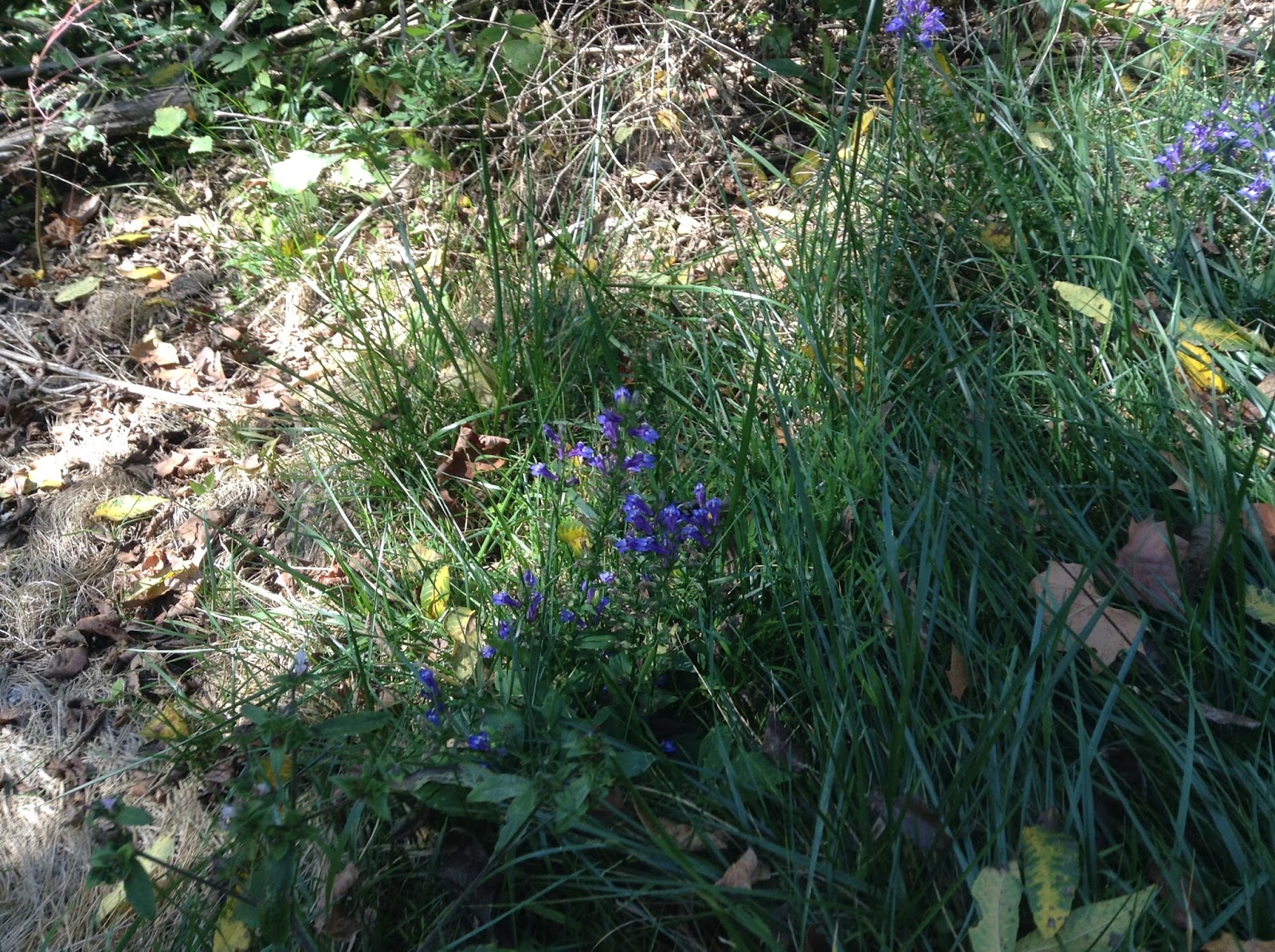 I intend to walk more of this trail, and to make it a regular part of my walking, especially in wet weather. I'm inclined (as a walker, not biker) to sneer at such smooth pavement, but I truly hate wet feet.
Posted by solarity at 8:32 PM 2 comments:


I ought to cut these down, since I'm allergic to goldenrod, but they're just too pretty to kill. 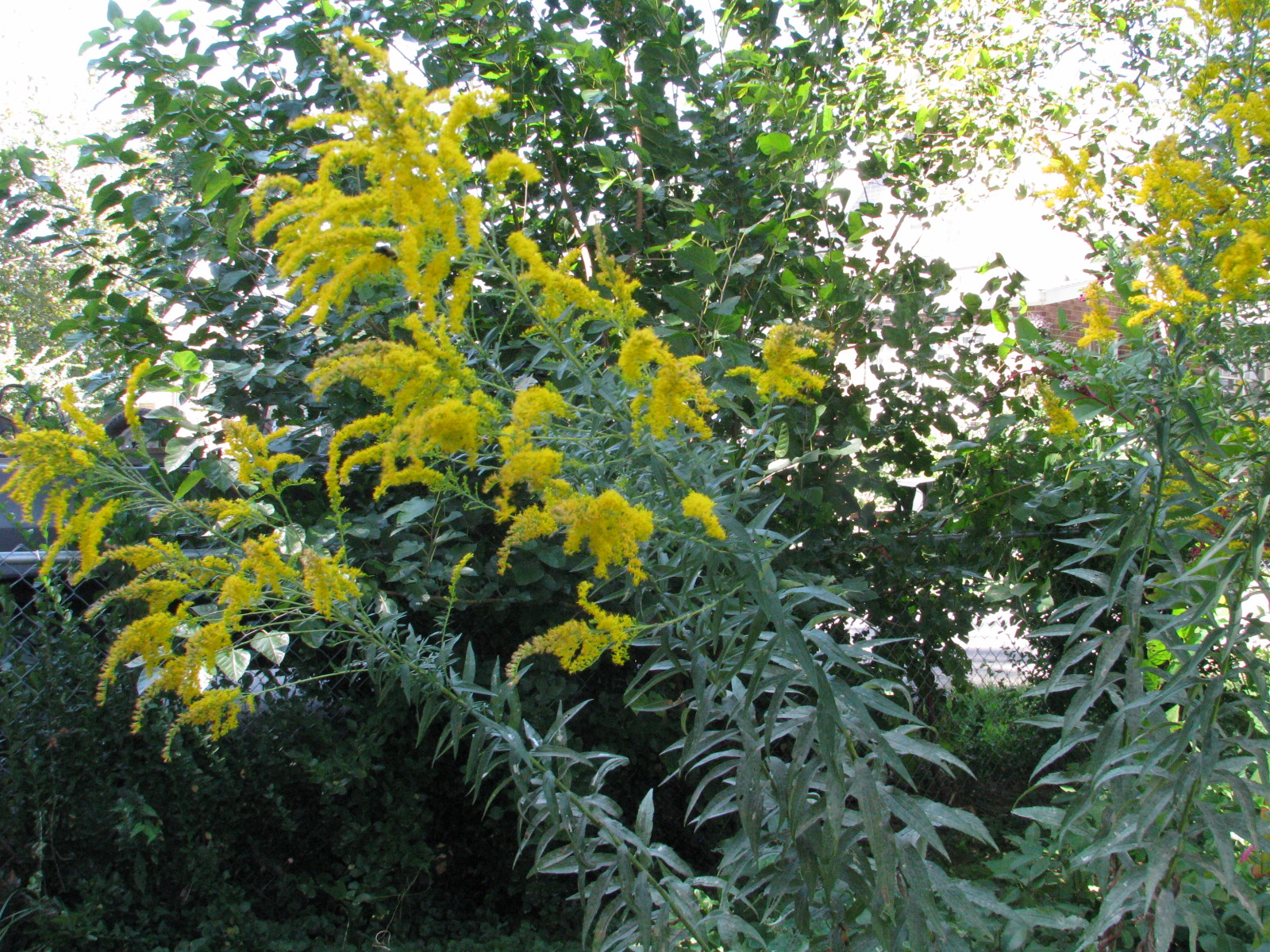 Since goldenrod pollen (unlike ragweed) is very heavy, it doesn't really bother me out in the yard; the problem is when I drive with my windows open along roads where it's blooming all over the ditches. I should drive with my windows closed and use the air conditioner, and avoid itching eyes and stuffy nose for a day after, but somehow I don't. 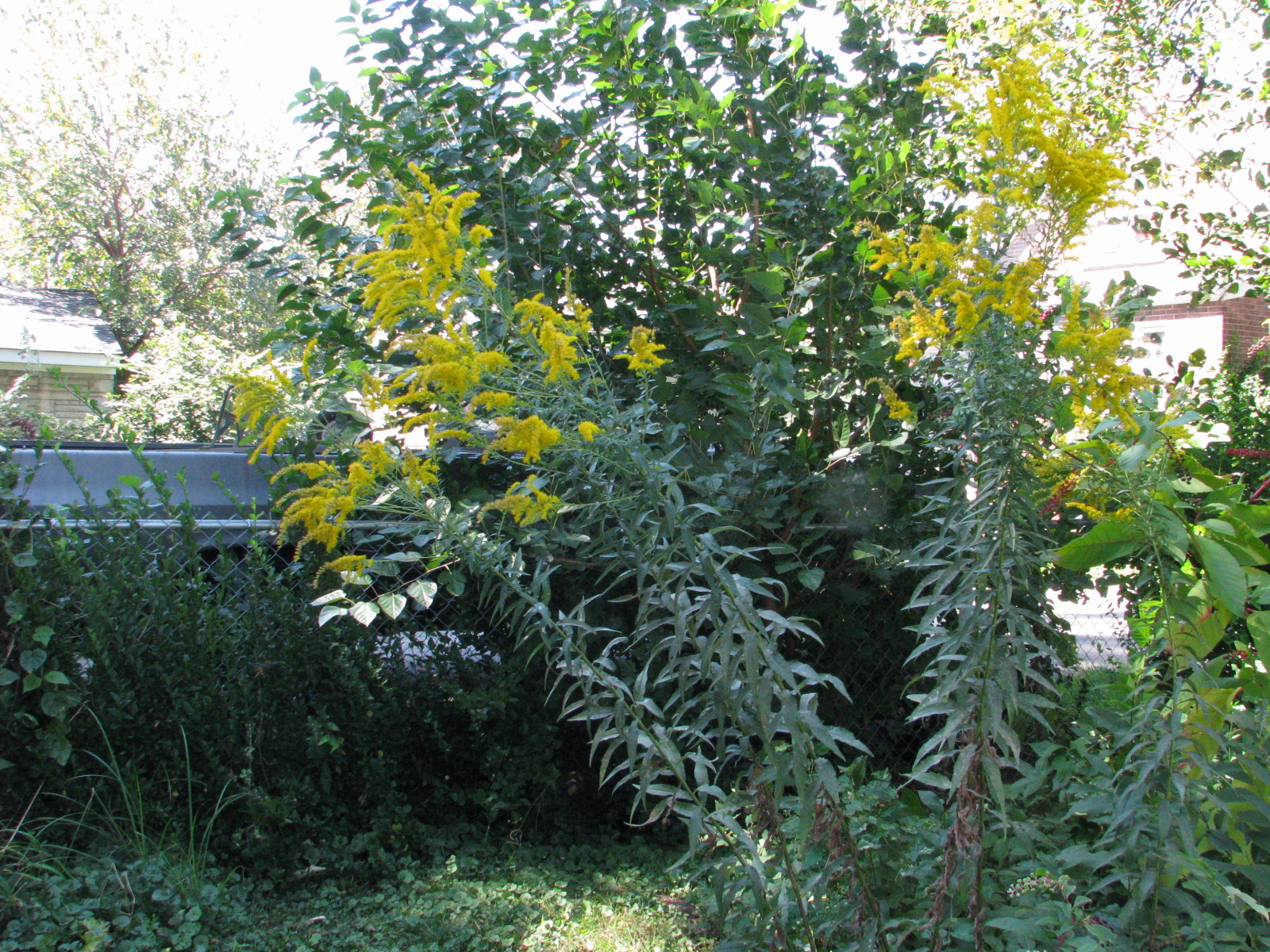 Other wild plants I cherish in my yard: 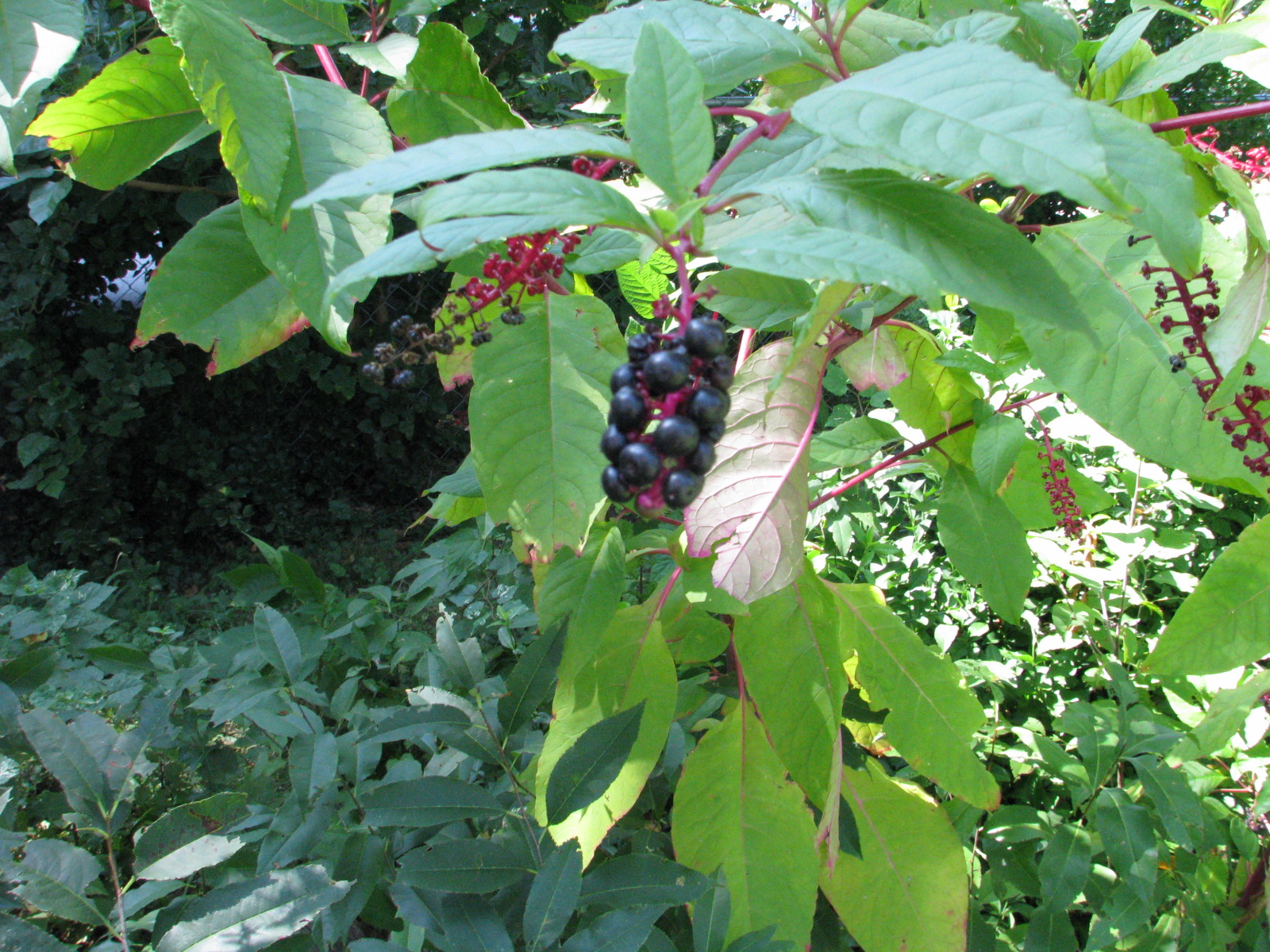 I let most of the poke weed grow. The birds love it, and are working hard to spread it around. 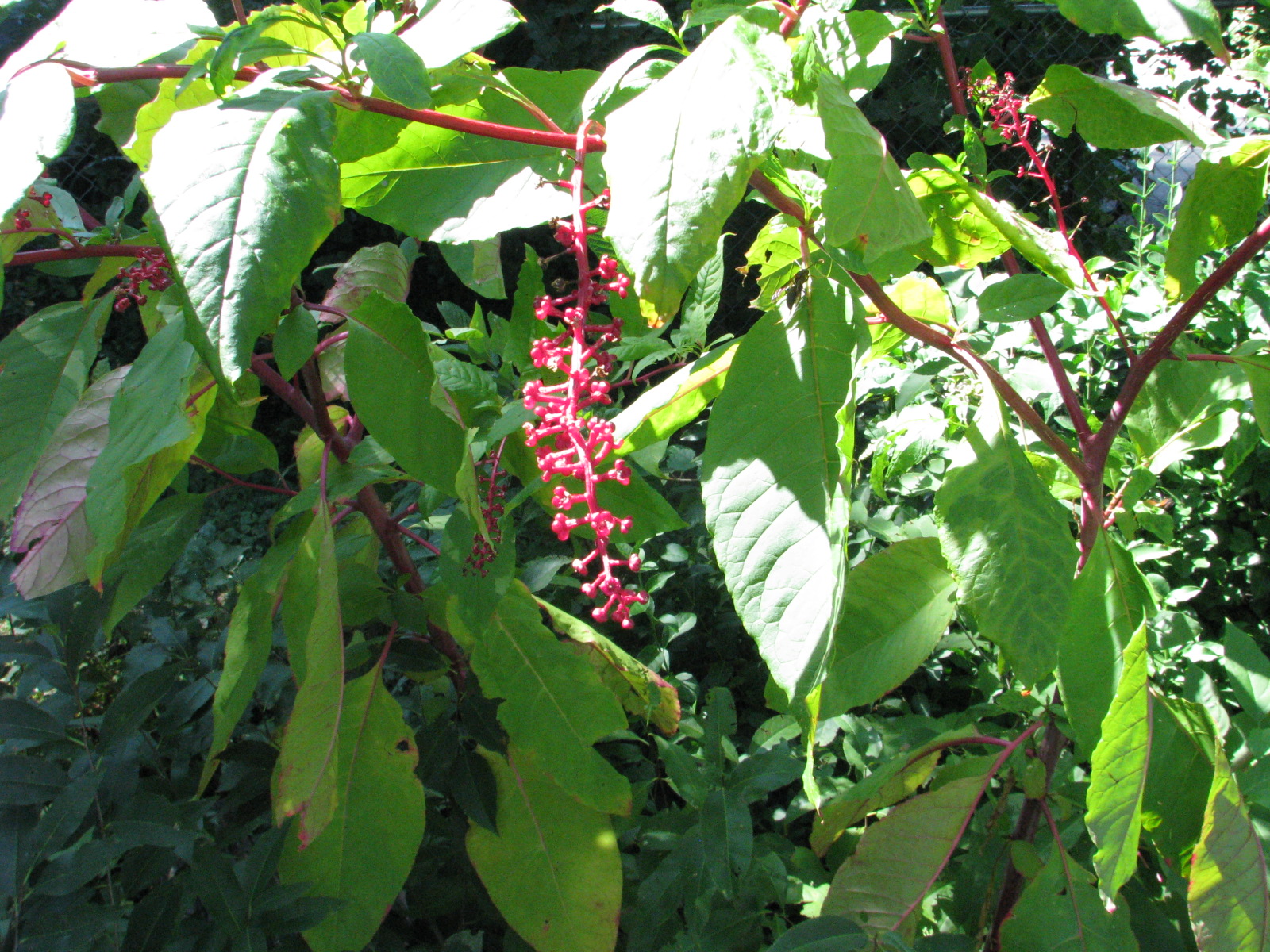 Almost finished, there.
Posted by solarity at 8:06 AM 2 comments: