I planned before I even bought the house to hang some shelves on the door to the upstairs and use it as a pantry. I bought this set of shelves back in October, I believe. I know it was taking up space in the living room before Christmas. 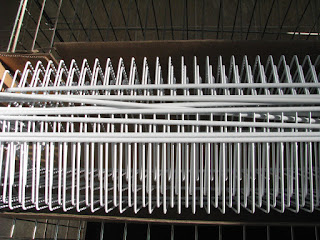 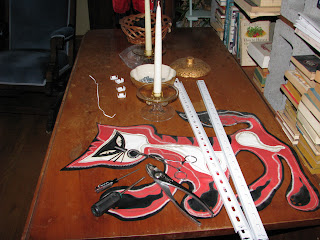 So by the middle of January I opened the box and tried to figure out the instructions, which were very brief, and the pictures...lacked detail, shall we say. I did manage to guess how it was supposed to go together, but attaching the hooks that were supposed to go over the door seemed to require three hands to hold the hooks in place while fastening the nut and bolt that held them to the uprights. At last I tried some duct tape and got them together. 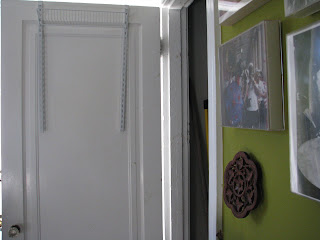 They are not hanging parallel because the top of the door is uneven, but attaching the shelves fixed that.

Then I looked in vain for the screw or bolt that was supposed to hold the fastener in place to attach the next two pieces of upright. After going back to the instructions the next day, I realized that the tiny round object in the drawing was actually the rectangular thing that hooked the two pieces of upright end to end. No extra part needed.

So I attached them, only to discover that the door wouldn't close because there wasn't enough clearance between the edge of the bottom step and the door to fit the hanging strip in. I took the bottom pieces off, and screwed the second pieces to the door to stabilize them.

Then I proceeded to add the shelves, and fill them. 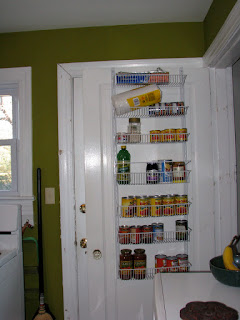 Despite the shorter shelves, I was able to fit all the canned goods into them, leaving nothing in the base cabinet just left of the sink except the mixing bowls, flour, sugar, and other baking materials, and room to reach them.

I am delighted, and if they don't fall apart after a month or so, I intend to buy something similar for the bedroom closets.
Posted by solarity at 7:14 PM 6 comments:

I brought up the plant stand my father made for a particular corner in my parents' house and found a corner for it here near the door to the porch. The east-facing porch, and the glass has been treated with fake "etching" (for some much needed privacy, I'm sure) but these aren't plants that need a great deal of light. They've all survived five months on top of the refrigerator in the darkest part of the kitchen. 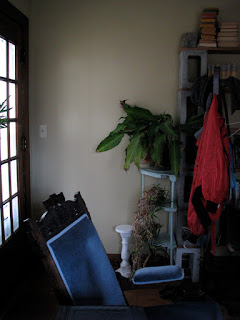 This plant stand was created during what I think of as my father's Dowel Period, when he made a lot of shelves by drilling holes in plywood to fit dowels through, but this was one of his earliest, when he hadn't quite mastered a method of keeping the shelves from sliding up and down. It's a good thing the plants tend to hide a lot. 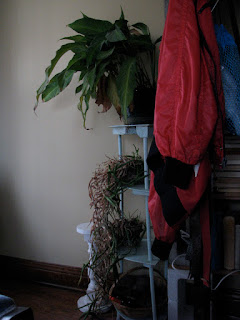 I put a basket with pruning shears and gloves on the bottom shelf, even though it looks like the door will light the bottom pretty well.

Here's the corner of the mantel right next to the porch door. (All my wood is on the porch, since I haven't got the stove installed and haven't bought more.) 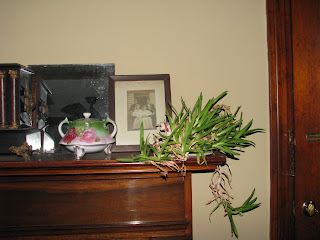 The planter this plant is in belonged to my grandmother, who is the left-hand lady in the photograph behind it. (The enormous sugar bowl with roses belonged to her much longer than the planter; I keep firestarters in it.)

I must learn not to believe my camera in certain lighting situations, and to trust its stabilization. The first two shots I took handheld at 1/30 at f2.7, before switching to auto so I could use the flash. The color is much more accurate without the flash, and the two repeat shots I took of the plant stand were horribly washed out.
Posted by solarity at 9:26 PM 3 comments:

Here is an Amazon parrot who boards with us (also his cat and his dog.) He is now 47 years old. 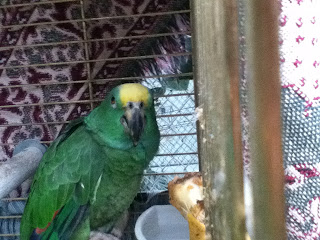 That's his own patterned cloth he brings for a cage-cover. It suits him. 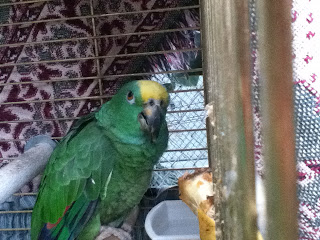 Here is our new resident Amazon, whose owner died recently. He has begun to settle down and not try to fly through the cage every time someone approaches unexpectedly, but he's still nervous. 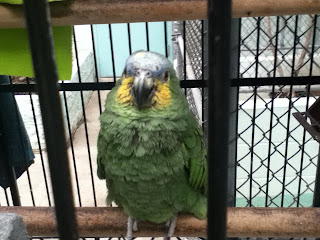 See how puffed up he is? He's not at all sure about me and the camera. 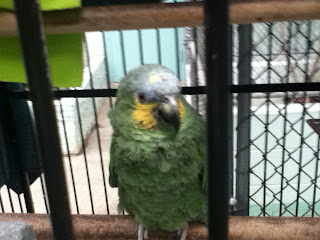 Booger, on the other hand, has lived at the clinic for many years (she's 38, although I'm not sure how much of her youth was spent in the bar where she learned her language) 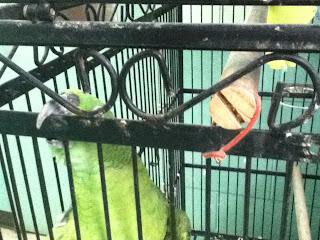 Booger knows that the camera is a Shiny Thing that should be shown off for. 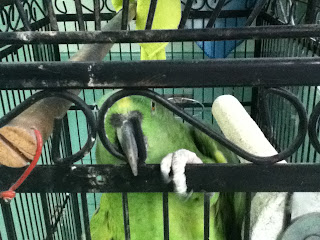 She's very good at showing off! 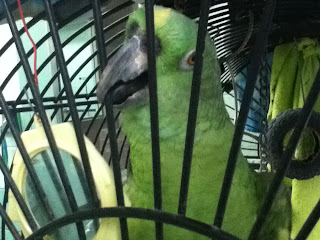 The orchids are fighting the wintry weather with panache. I tried to get the Christmas lights strung around the atrium to show up, but you can barely see them if you concentrate. 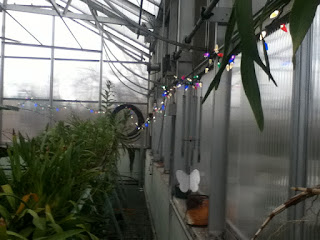 Then there's the lighted blob which is a Dalmatian in a Santa hat if you're close enough: 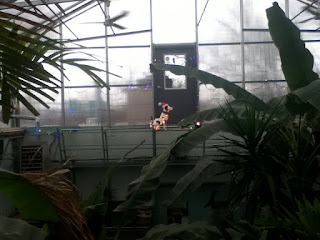 But the orchids are having no trouble showing up. 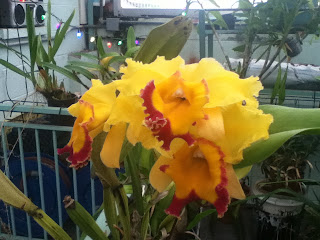 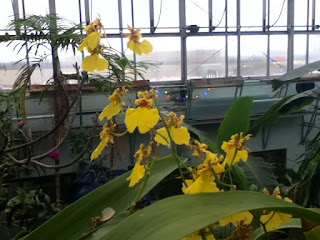 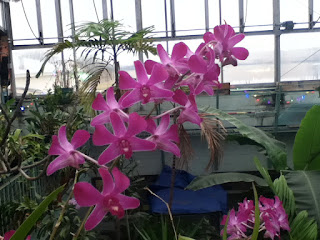 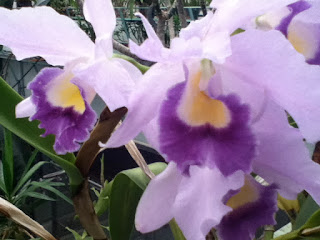 I do love having a piece of warm summer available at work.

I'm putting together my block-and-board shelves (remember, Kentucky has had one 4.x earthquake in my almost sixty years) slowly, gradually. I'm unboxing the books and just stacking them without trying to sort them yet. I have to move a lot of boxes out of the second floor before there is room to move the furniture around so I can put up shelves there, too. There may be room for all the books, or there may not. Experiment and find out!


The living room has a few shelves on the wall out of frame to the right, but this is the main section. 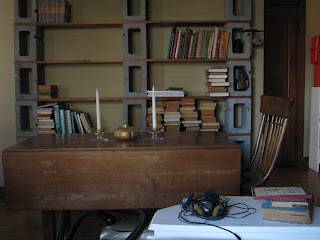 Here in the office I chose not to cover up the tree completely (I rather like it), so I put some low painted wooden shelves against that wall. At right angles you can see the top of the wall of books along a treeless wall. 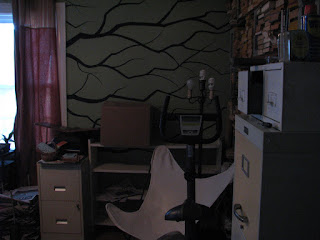 What you can see here is about half the file cabinets in this room. Yes, I have archival quantities of paper.
Posted by solarity at 1:39 PM 4 comments:

progress in the kitchen 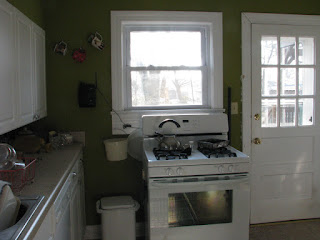 In addition to the mugs I showed you all before, I hung these photographs at some point before Christmas. 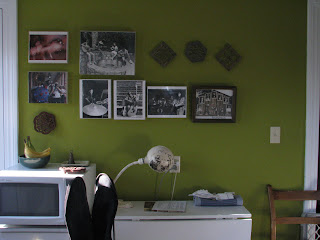 
For once, I had time to go get the camera before the sun was through playing with the horizon. 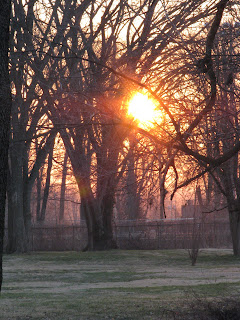 I moved the bird feeders into each other's places. The squirrels were able to overcome this. 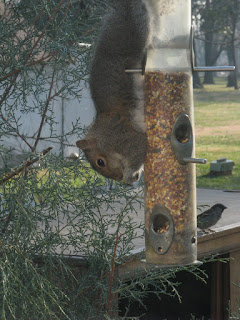 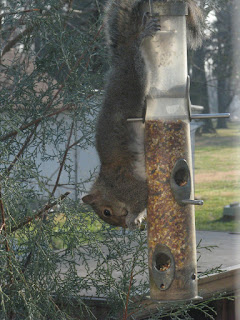 I was unable to get any pictures of the birds using it, because if I approached the window with the camera, the birds assumed I was about to let the dog out the door and fled.

Both of these feeders are sold as "squirrel proof" and so they have been, for almost fifteen years, in five (more or less?) different houses before this one. Although the dome shaped one was once conquered by a Very Tall Squirrel who could hold onto the center pole with his hind feet, s t r e t c h down across the dome, and reach inside with his front feet to stuff his cheeks. 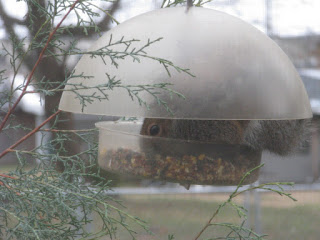 This guy has simply managed to push the dome up its sliding post and slip underneath, holding it partly up with his body. 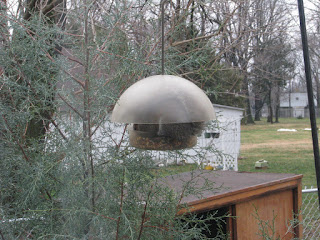 I have never hung the tube one where it would have a standing place below it until now. Clinging to its outsides does not seem to give the flexibility needed to reach into the tube through beak shaped openings. 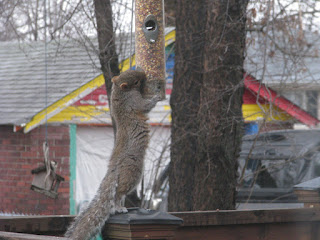 These squirrels are highly motivated and quite fat. Maybe I need to switch the feeders. (The squirrels have already destroyed my third (tube-type) feeder by simply ripping the bottom out of it.)