I changed from the winter season mugs some time ago, when spring began to be believable. I haven't decided yet what to put up for summer, but I believe these silly hooks are going to be fun. 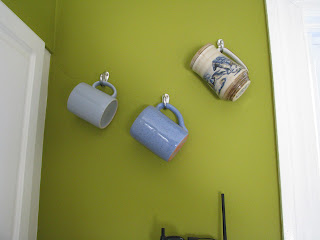 The way these pea-soup green walls set off many of my mugs almost resigns me to them.  The mug on the left is one I picked up in a thrift store fifteen to twenty years ago. I rarely use it now, because the one in the middle is one of several Bybee pottery mugs I own. Bybee is a very tiny town in eastern Kentucky where many generations of a family have been making pottery for a long time. http://www.bybeepottery.com

We went there once or twice when I was a child, and watched the potters at work, and bought seconds. Nowadays they're so fashionable that seconds are snapped up as they come out of the kiln, more or less, and they have a store (in what was the grocery until I was in school) in the town I grew up in (now  surrounded by Louisville, grrrr) where I bought several more pieces a few years after I moved back to Kentucky.

The mug on the right is especially appropriate for May, Kentucky Derby month. 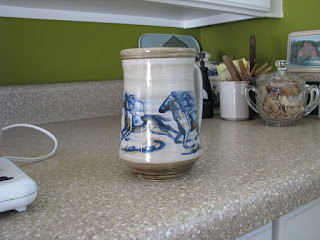 It commemorates the 100th Kentucky Derby in 1977. Louisville Stoneware is also an old pottery.
(I really need a macro lens.) 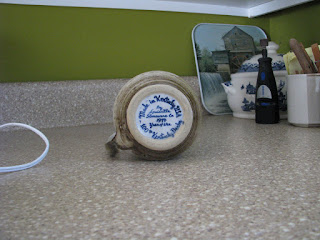 I don't remember who gave it to my parents, but I remember my father trying it out for drinking coffee. He seldom drank coffee at home, because of my mother's coffee allergy. Since they were both great coffee lovers, he felt her pain. It sat in the back of the cabinet for years, and I took it home with me and also found it unsatisfactory for coffee. Something about the size and shape: the coffee gets cold too soon if you fill it up, and drinking the last drops is awkward. However, I have found it very useful for drinking gazpacho from; just the right size. I won't be doing that again until I acquire another blender: the one my aunt and uncle gave us in 1968 having finally died last year. But hanging it on the wall reminds me that I have it, and might use it. I use the Bybee mug at least three times a week year round.
Posted by solarity at 9:59 AM 4 comments:

After several trips when I had time after work I've brought all I could from the house I sold to the new one. 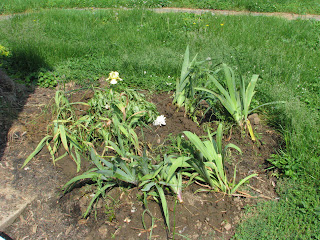 There were some poppies in there, but I'm not sure they have survived: 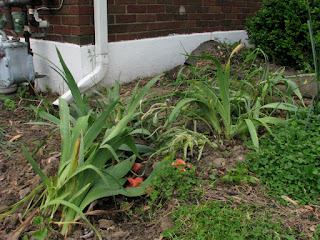 At the other front corner of the house, lots of peonies: 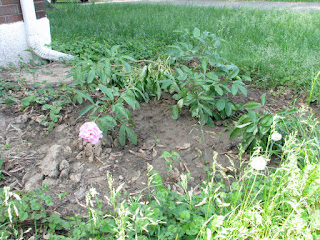 Up against the neighbors' fence in the back, lots of daffodils and daylilies: 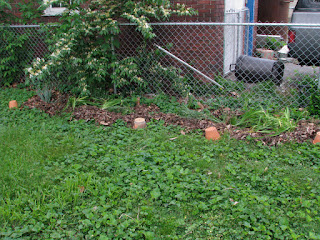 And on the porch, fifteen boxwood cuttings: 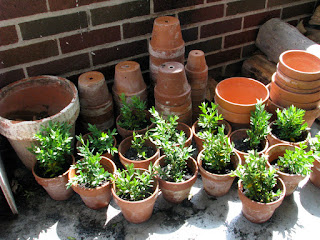 Isn't it a good thing I didn't get any vegetables planted except for pots of lettuce? Watering these for the next month or so until they settle in is going to keep me quite busy.
Posted by solarity at 7:35 PM 3 comments:

more from the kitchen window

I've spent the last few weeks frantically transplanting everything I could from the old house about to be sold to the new house until I ran out of space. Very little of it will bloom this year, due to the shock, but I can steal views of the neighbors' flowers from the kitchen window, and the porch. 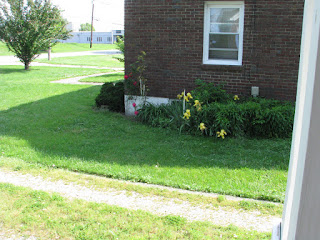 Some of the plants I've moved include yellow iris, but of a different shade than these. If you look hard, you can see the red roses, too. I have no roses, but this appears to be a very good neighborhood for them, so I expect to be getting some this fall. 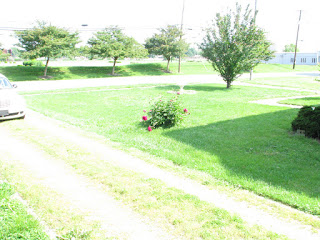 The peonies at the corner of the shadow are the darkest red I've ever seen in a peony. I'm not sure which of my peonies from the old place I dug up, because they weren't blooming yet, and there are lots and lots of them, but I know none of them were anything like that. I must cultivate my neighbor and try to beg some in the future.