I didn't mean to do this 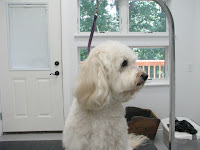 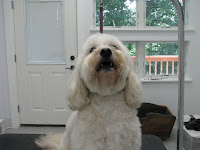 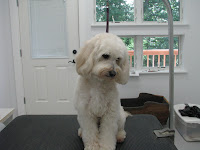 I drove to work Saturday thinking that in a month or two it would be time to start looking for a poodle. I came home from work with part of a poodle--and part of something else. Murphy's people were trying to find him a home because he's bitten the toddler grandchild (who suddenly lives with them) twice and they can't figure out how to keep them apart. He's a sweet dog. He's never been around small children before, and the child has never been around dogs before. Having failed in their efforts to find a home for him,their next step was to put him to sleep, so I said he could come home with me, whether he ended up staying forever or not. It's been less than twenty-four hours, but so far it's going well.

Murphy gets very excited when he sees a camera, and stands on his back legs and waves, so I couldn't get a side picture that shows his lovely long flowing tail.