I got about two hours of sleep last night. According to the weather report, it rained 6.91" yesterday, breaking the record for the month, but I got home from work yesterday to two and a half inches in my rain gauge from the past twenty-four hours, and this afternoon I found four and a half inches from another twenty-four hours. I went to bed just after nine and was about to turn the light out when I heard this trickling water noise from the kitchen. "Did I forget to close the window? Did Stony decide to pee indoors instead of out in the rain?" I got up to look, and found water pouring out of my sink onto the floor, and starting to meander down the hall, turning left into the bathroom instead of continuing straight into the bedroom. I've learned a lot about the directions my floors slope, not always what my eye tells me. I called the Metropolitan Sewer District, but they're closed at night and I couldn't tell from the message whether they were answering emergency calls or not, so I called 911. I told the dispatcher that this wasn't a life threatening situation yet, but that if the water kept coming and soaked into the electrical wiring running over the basement ceiling, it soon would be. They sent the fire department (who much prefer to prevent fires, I'm sure) who siphoned some water out of the sink to make room for a submersible pump which they attached to my garden hose. I meant to take its picture in place, but when I came home for lunch today I was all about cleaning the kitchen and forgot.) 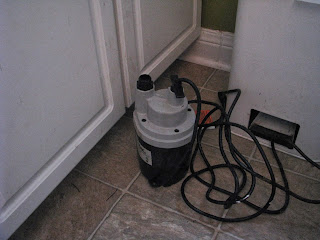 While they were situating that, they found the water that was pouring down the basement steps and making a great deal more than the usual trickle under the basement door. "Whoa! Cap, look at this!" one of them shouted, and when I went out to look off the deck, the steps looked kind of like a fish ladder. 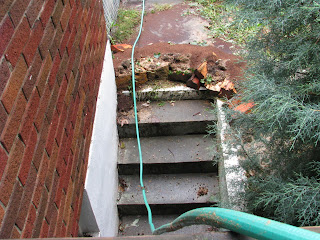 They tried using the pump for that, but it couldn't handle a ten foot rise. Instead they built me this adorable little dam out of some of my firewood and their sand. Men of great ingenuity and capability. 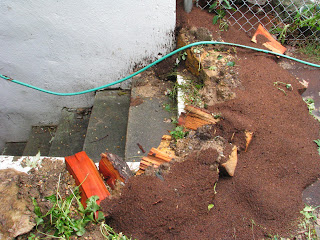 (The hose came out the kitchen window and drained the sink into the driveway. Why the house isn't full of mosquitoes I'm not sure.) 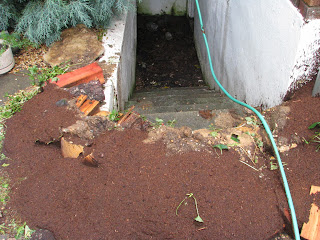 I shall have to dig this out soon. It was nearly empty of leaves and debris when the rain started, and now there's actually gravel down there. 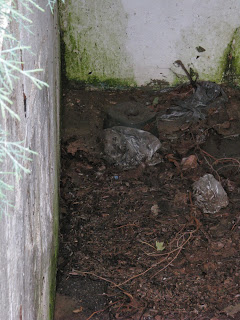 I am exceedingly grateful it wasn't worse, although I'm worried about what family history may have gotten wet in the boxes the basement is full of, but it reinforces my regret that I'm having to live where it's so very very flat. (Not to mention where the storm sewers and the waste sewers are combined. I know in newer parts of the city they are not.)
Posted by solarity at 7:29 PM