Not long ago I found this bird's nest. 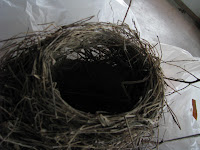 Since I have to decorate my house much more than my natural tendency because it's going to be in the House Tour this December, I decided to put it to use.
I sprayed it with a little gold glitter spray, proceeding cautiously, adding only a little (which doesn't really show up in this picture.) 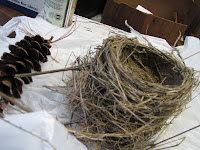 Then I added more. I tried the red glitter, too, but I seem to have a defective can of that: it doesn't show up on the nest or on the pine cones I tried it on.
So I kept on building up the gold glitter. 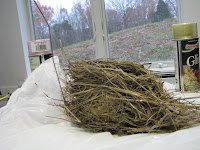 After three days it's a lot more glittery than shows up here. I tried both red eggs, and gold-and-clear eggs; the red were definitely best. 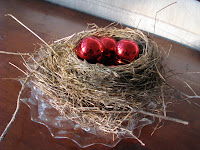 Then I decided it needed a bird. 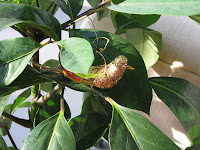 The eggs must be ready to hatch, since the bird is watching over them from a distance. Will the chicks be red glittery, or gold? 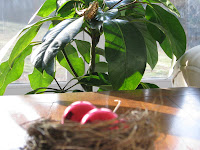 Having finished that project with such pleasure, I did a few more things that won't dry out like the greenery and the trees.
The red basket was painted by a friend of mine some years ago when she went crazy for painted baskets. The pine cones are a few of the ones in my driveway. 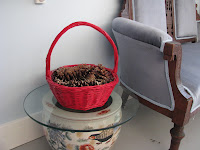 Then I got out all my dog ornaments, finding that there aren't really very many, but they do fill up a small window sill, and hung the Santa wreath that a former roommate and I found on the street and added a few things to. 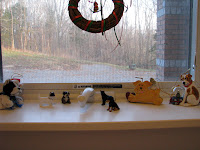 Then I stopped, because it's almost three weeks until the tour, and everything else I have planned involves fresh greenery. Now I must concentrate on putting away all the things that haven't really been unpacked in the past almost-year, and hanging at least a few more of the pictures. In less than three weeks. Yikes.
Posted by solarity at 5:46 PM