yellow (or not, depending on your screen)

I burn quite a lot of Osage orange. My wood man saves it for me (or palms it off on me, whichever) because I have stoves, and it's dangerous to burn in a fireplace even with a screen, because it pops like crazy, throwing sparks everywhere. It's a reasonably good heat-producing wood, not as good as oak and ash, but better than fruit woods, and there's a lot of it around here, because early settlers planted it as a hedge. It makes good fence posts, because once it has cured it's hard as a rock and rot resistant, but that means that as firewood, you can't split it except when it's green, so it's not a favorite firewood even with people who have stoves.

It's called Osage orange not because the wood is orange, though it often is, but because the fruits, which stay green, are large and round and have a rumply-bumply skin rather like a navel orange. The color of the wood varies from light to dark, but I've never seen this bright yellow before. I was amazed. 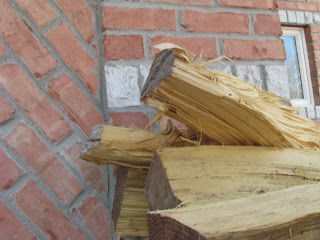 And once again blogger desaturates color. I'm looking at the screen, sitting beside a small pile of it, and that's not it! What you see above is to the real color as banana-yellow is to lemon-yellow. Oh, well, at least the textures and composition are pretty.
Posted by solarity at 12:55 PM