This is how I boil the water without electricity when I grind the beans by hand. (I've actually had to do this only a few times.) I can heat water on the wood stoves, if the electricity goes out in winter, but to get water to the not quite boiling temperature for making coffee on the stoves would take too long first thing in the morning, when I Must Have Coffee NOW. 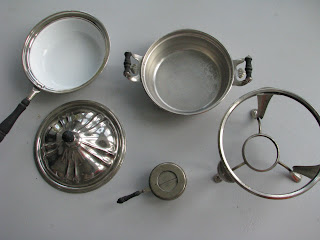 This is my great-great-aunt's chafing dish. Various parts of it have patent dates of 1899 and 1901, but it may be several years newer than that. My mother, born in 1916, remembered it being used at parties when she was a very small child, so it can't be later than 1920. The shiny pieces are nickel, not silver. So, I believe, are the not shiny pieces. (Matte? Can metal be matte?) 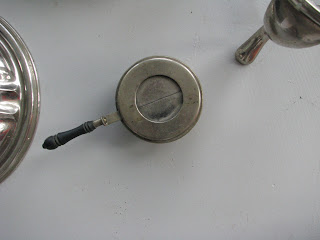 Here's the alcohol burner, closed. I had hoped its name would show but I don't think you will be able to read the lid even enlarging it all the way.

"Perfection. Manning, Bowman, and Co. Feb. 15, 1898-June 18, 1901." I do hope the company lasted longer than that. I don't imagine the dates refer to the design process, either. But they certainly aimed high. 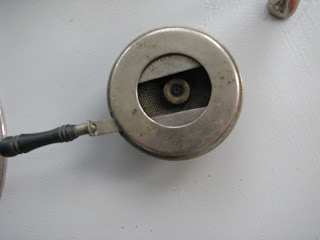 It opens farther than this, and the handle makes it easy to adjust the flame to exactly the right amount of heat. 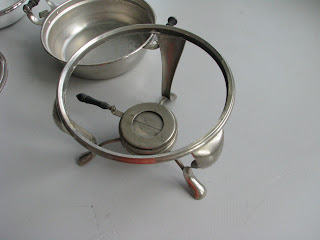 The burner fits into its place in the stand very solidly, so there is no danger of it tipping when you adjust the flame. The feet of the stand are smoothly finished so there's little chance of it marring whatever surface it is placed on. 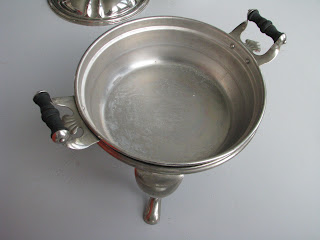 Next, the water bath goes on top of the stand, to act as the bottom of a double boiler, for foods you want to keep warm, rather than cooking directly. 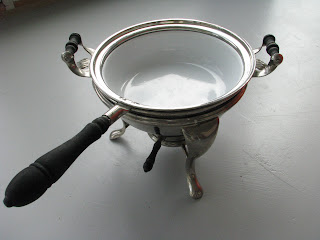 Then, the enamel sauce pan, with the long handle for safely serving hot foods around the table. It can be used without the lower water bath if you want to heat water quickly, or fry things, or otherwise cook over direct flame. On one memorable occasion in my childhood, my parents--who didn't entertain very much--used this setup to make Crepes Suzette, which they had enjoyed in restaurants when they lived in New Orleans, but never made themselves before, for friends of theirs. (We are a brave people, my family; we cook flaming foods for guests without practicing beforehand. Fortunately, we usually have brave guests.) The long handle provided protection from the burning brandy, and allowed my father to serve the crepes onto the plates still on fire without burning himself or anyone else. 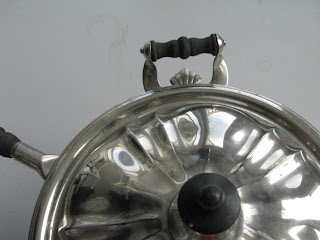 Should the flames get out of hand (which they didn't on that occasion) the lid fits quite tightly. 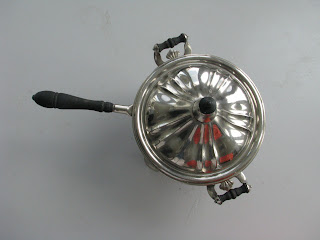 So much more fun than a camp stove, if not quite as portable.
Posted by solarity at 8:26 AM