I hit a deer this morning. All the time I've driven country roads I never have before. I was amazed to be unharmed. The Jeep, however, was not doing so well. Neither was the deer. The woman who came out to see if I was all right called her husband out to shoot it; both rear legs were broken and it kept trying to get out of the ditch and cause another accident. (It was rush hour; although I took the picture when the road was empty, there was a steady stream of cars coming along.) 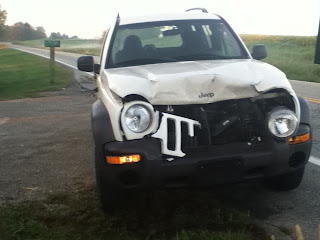 This is when I am so thankful to have two cars. You can't see in the picture, but the radiator is leaning back against the engine, and the power steering was non-functional, so I have not yet even had an estimate of how long the work will take. 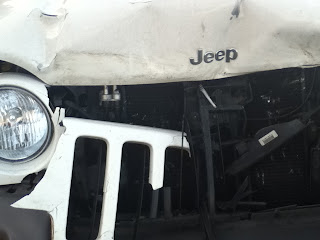