I’ve been pondering why the phrase “thank you for your service” to veterans makes me so uncomfortable. I think it would have made my father uncomfortable, too, although I don’t think it became so prevalent before he died. He served in the Coast Guard during WWII, and had three battle stars on his service ribbons, and stayed in the Reserve for thirty years, during the Cold War (he was on one-hour alert during the Cuban missile crisis--I don’t think my parents knew that I knew that), and his service was gladly and freely given. I grew up expecting to spend some years in some branch of the military, like him, and then stay in the reserve, and I probably would have if I’d ever been able to pass the physical on my healthiest day in my twenties. 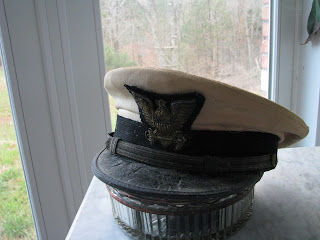 I honor those who serve, but thanks from me seem inappropriate in some way. I've failed to pin it down. The portable road sign at the county line flashing "Welcome home, Spc. Gore" seemed entirely and delightfully appropriate.
Posted by solarity at 11:11 AM