In the forty-eight hours from Sunday afternoon to Tuesday afternoon I collected two and a half inches of rain in the rain gauge. (The few pieces of sleet and snow from Tuesday wouldn't have made much difference to the total.)
The building where my second job doing kennel work takes place is, shall we say, unusual. Bits and pieces have been added on over the years seemingly at random. Therefore, there are leaks. Monday evening I was asked to move a set of cat condos because the water running down the wall behind them was getting into them. When I had moved them, we found that catching the drip was a bit difficult,  because it ran down the wall and then dropped to the window sill, where it splashed and splattered. Putting a pan at floor level did nothing to collect the water.
So my co-worker's ingenuity was tested. He collected a bird-cage stand, a food bowl, a flower pot hanger, and an upturned litter box to prop the stand against the wall. I added the towels in case of overflow. 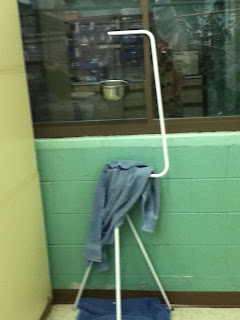 A closer look at the pot: 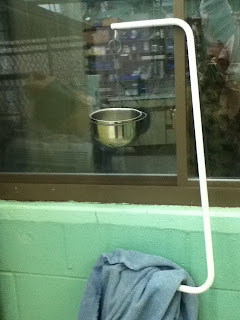 And three seconds of live action, with local background music:

It made me proud to be human. Rube Goldberg's got nothing on us.