In December, all of us from my first job went to a play together, which has been a tradition for a number of years. In a metro area the size of Louisville, there are several different Christmas themed plays every year, but this year we went back to Actors' Theatre's A Christmas Carol and it was very good.

Afterwards, we went to a restaurant which does not take reservations, but which is a favorite of several members of the party. Consequently, we spent more than half an hour waiting on the sidewalk as they tried to find room to set up for sixteen people. I did not have the sense to pull out my iPod and use its camera until the third time a horse tram pulled away with people willing to pay a disproportionate amount of money for a fifteen minute ride. (Of course, I'm allergic to horses, besides seeing several horses look over the fence at me every time I leave my driveway, so it isn't the kind of thing I would splurge on, although it would be enjoyable. In warmer weather.) 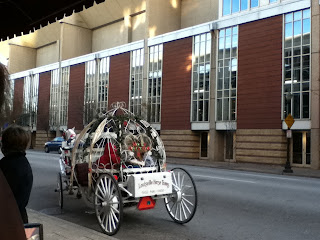 After I remembered I had a camera of sorts with me, I started taking pictures of things I was enjoying looking at as I shivered in the wind.

The sun was going down, and making interesting light patterns: 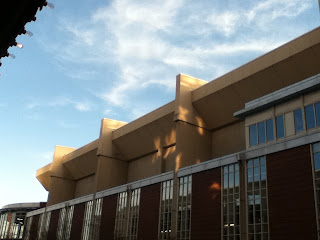 But it hid behind the clouds just as I clicked on this tower, leaving it quite menacing, instead of lacy: 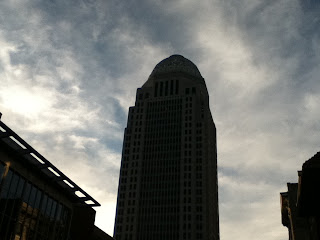 And the iPod's digital zoom was seriously overstrained by this tower: 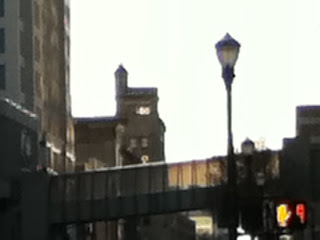 It got too dark to get anything with that camera soon after I took this reflection: 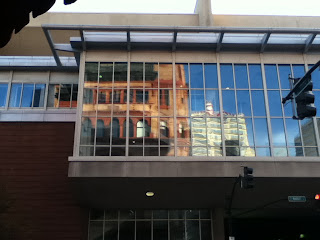 But I must try harder to remember I have a halfway decent camera in my pocket when I see interesting things.
Posted by solarity at 4:24 PM