Instead, I came home with a dozen Bibb lettuce plants (the only kind I willingly grow or eat). Due to some misunderstanding or incompetence on my part and the cashier's I found I had bought four six packs instead of four plants, so now every pot that didn't have something else growing in it is now filled with lettuce. I was too rushed to find the gardening fork (somewhere in the basement since moving) and dig up part of the flower beds in front, so I grabbed every pot outdoors, waiting for pansies and portulaca. 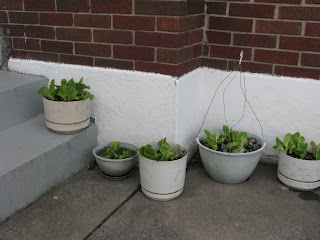 They're on the east side of the house near the side porch steps, where I hope they'll be sheltered if there is any frost. It's a month at least until frost-free date. 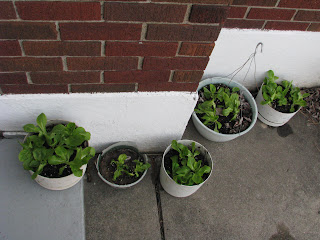