That's a strange item for a To Do list, but my cat needed mending! 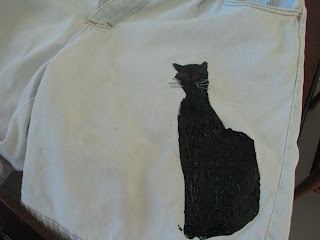 After many years of washing, the whiskers were coming off. (I got these sturdy jeans shorts for free, but they had a cartoon animal painted on them by the previous owner. The cat's rather strange posture is covering it up. I touch up whatever part of the cat shows wear with the fabric paint I originally used.)

As usual, I forgot to take a "before" picture, but here are the new whiskers all sparkly. 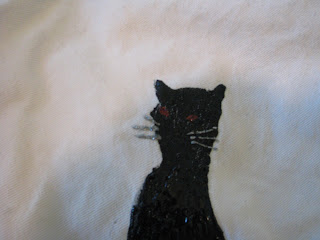 I had wanted a shower head that was adjustable in height (to be used either standing or sitting) and also in angle. The only telephone shower (do they still call them that, or is that totally 70s?) I liked for its height adjustability was not, the saleswoman and I thought, capable of changing its angle. So they were installed, and we moved into the house in December 2008. 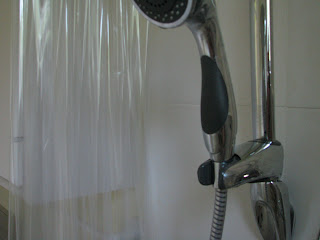 This is what they look like. This one is at the bottom of its height adjusting rod.

Last week I was putting it back in its bracket when I heard a crack. I thought "Oh, dear, it's breaking!" But it wasn't broken. 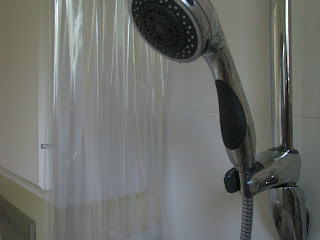 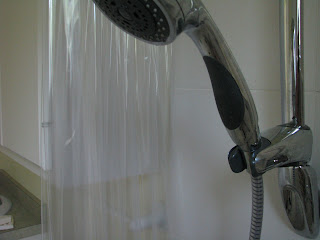 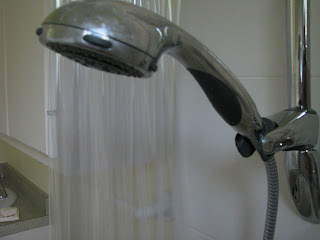 ...reveals that the saleswoman and I were quite wrong.
Posted by solarity at 7:44 PM 6 comments:

The peppers have sent one of themselves ahead to test the climate. Is it time to turn yet? 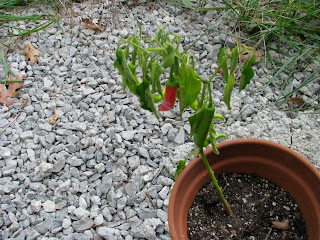 The leaves look a lot more withered than they did in real life; perhaps it's time to die? I'm waiting for them to decide. Cayenne peppers are tough, though.
Posted by solarity at 8:51 AM 3 comments:

Every day there are some open. I didn't have time between daylight and leaving for work to take a picture of the five at once opening, and as summer ends I'll have less and less daylight on work mornings, but here are three. 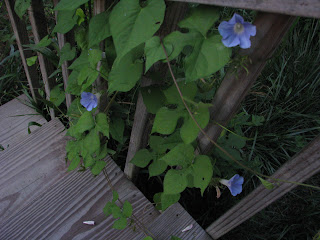 This morning it was so foggy none of them opened at all.
Posted by solarity at 8:54 PM 1 comment: 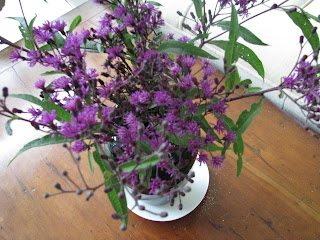 I love purple, and ironweed is one of the purple-est wildflowers available, especially in the fall.

Is it my imagination or does blogger now take twice as long to load photos in its new interface?
Posted by solarity at 9:10 PM 4 comments:

I was going to pull this vine loose before it strangled the bird feeder and the step railing completely. 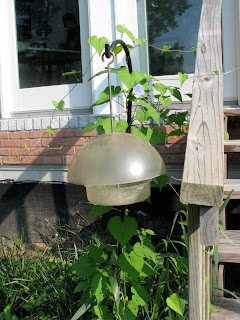 Then I saw this. 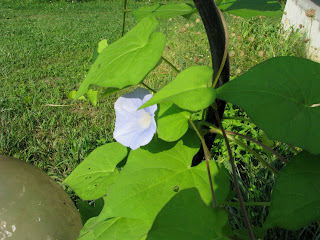 Thank you birds. I think. I planted morning glories last year, on the other side of the house. They didn't come up at all. I doubt that the birds went half a mile away to deliver someone else's morning glory seeds here. I wonder where they left the rest of last year's seeds?
Posted by solarity at 6:55 PM 4 comments:

My cayenne peppers in pots are doing considerably better than their brethren in the ground.

This one has produced four peppers, that are still growing: 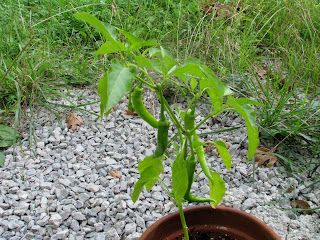 The other one has put all its energy into being BIG: 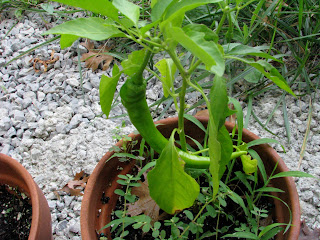 If it grows any bigger will the pot tip over?

I'm waiting impatiently to see them change color. The last time I grew any I had three plants, not two, and the peppers they produced lasted me two years of cooking. (I use cayenne at least once a week. I was astonished by how much powder the dried peppers produced when I ground them up in the coffee grinder, and then cleaned the grinder very carefully.)
Posted by solarity at 9:11 AM 2 comments: