End of summer getting closer

I walked the so-called Big Beech trail today (I've never seen a beech that's really big there--I'd call it the Many Beeches trail) for the third time since that part of the Louisville Loop opened. My troublesome foot is still content right now. Most of the two and a half miles I walked was soft surface; only about a mile was paved, the part to the trail and back from it. That's the part where all the wildflowers were, though, out in the sun and not in the woods. There was plenty of boneset in the woods, but the buds were barely showing any white.

I may have seen this one before, but I have no idea what it is. 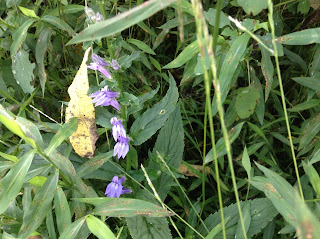 The essence of late summer. 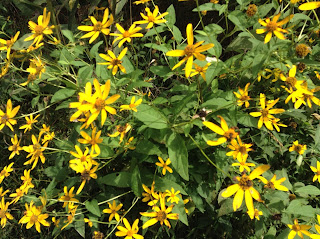 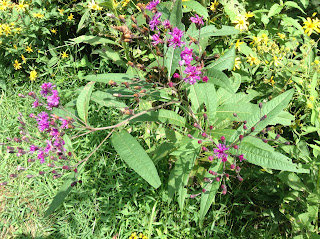 I think this is sensitive plant. There was a lot of it. 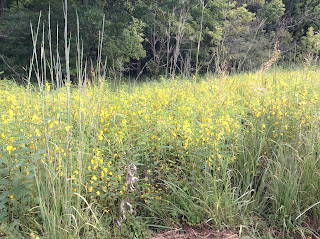 Most of the goldenrod hadn't opened yet, but this had. 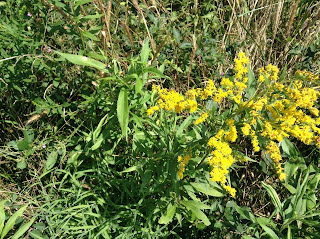 There was plenty of wild ageratum in patches. No, this isn't sideways. It's all reaching out of the shade. 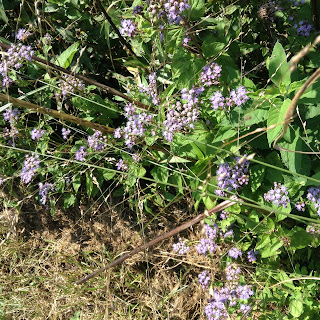 Lots of color. In my yard, the goldenrod, which I should pull up since I'm allergic to it, but don't because it's so pretty and the pollen, unlike some, is heavy and doesn't travel far (such as into the house) is not at all ready to open, and most of the pokeweed berries have been harvested by the birds, so the only patch of color right now is the zinnias by the front steps. I cut some nearly every day.

This walk was so satisfying. The weather was perfect, sunny but not hot, with a mild breeze. I must make more of an effort to take walks that my foot will be happy with.
Posted by solarity at 5:17 PM